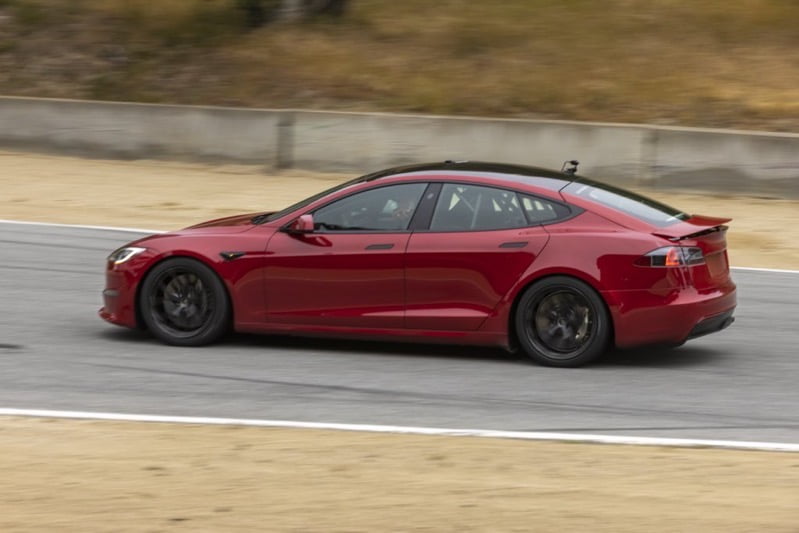 “Tesla is currently attempting lap records in a couple of Model S Plaid (possibly a Plaid+) prototypes at Laguna Seca Raceway! They just secured a 1:30:XX (unconfirmed time),” said @klwtts on Twitter about half an hour ago.

Check out more images below, in what looks to be a Model S Plaid on the track, even with an adjustable rear spoiler.

Tesla has been testing its Model S Plaid on Thursday and Friday, says The Kilowatts.

BREAKING: Tesla is CURRENTLY attempting lap records in a couple of Model S Plaid (possibly a Plaid+) prototypes at Laguna Seca Raceway!
They just secured a 1:30:XX (unconfirmed time)
This is a developing story – more photos and videos to follow. pic.twitter.com/BqxPdK4k43

You can chat with The Kilowatts on Clubhouse in just over an hour, as they will be discussing the Model S Plaid they spotted at Laguna Seca Raceway.

Last September, Tesla shared a video of its previous Model S Plaid run at Laguna Seca, with a 1:30.3 lap time.

It remains to be seen if the Model S Plaid can break its own record, but a lot can change in eight month’s time, in terms of vehicle tweaks related to software and hardware. Let’s wait and find out.

SpaceX’s Next Starlink Satellite Mission Pegged for Saturday, May 15