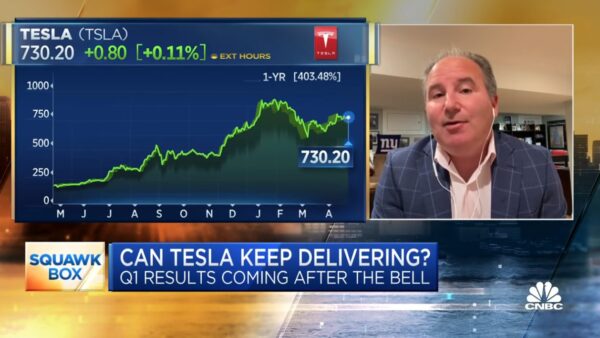 With Tesla’s Q1 earnings call scheduled for later today, Wedbush Securities Managing Director Dan Ives spoke with CNBC about Tesla’s delivery forecast being the most important factor to Tesla’s earnings, saying that the company’s delivery forecast could be headed toward 900,000 for 2021. Ives and Wedbush currently have Tesla’s price target set at $1,000, with a rating of Outperform.

On CNBC‘s Squawk Box ahead of the earnings call Monday, Ives said, “[The key] is really delivery guidance for 2021. … Now despite all the skeptics, competition, chip shortage issues, I believe we could be starting to go toward 900,000.” Ives continued, “If that ultimately comes out tonight in terms of some sort of goal post, I ultimately just think this is the next step in the stock going toward $1,000.”

Tesla’s (TSLA) shares have grown over 400% over the last 12 months, and with first-quarter sales that outperformed Wall Street estimates, 900,000 deliveries might not be out of the question.

The company’s stock also made a small jump after reporting record deliveries in the first quarter, garnering the company’s new $1,000 price target from Wedbush.

Along with its position as a car company, Tesla is expected to justify its valuation through the use of subscription-based services, not unlike Apple, as well as the use of advanced driving assistance systems (ADAS) like its Autopilot and Full Self-Driving (FSD), and even the potential for these technologies to produce self-driving robo-taxis down the line, according to CEO Elon Musk.

Tesla CEO Elon Musk has spoken out in regards to his agreement to buy Twitter on the original terms, after news broke on Tuesday morning. Musk said just now, “Buying Twitter is an accelerant to creating X, the everything app.” When asked if it would be easier to build X from scratch, Musk replied, “Twitter […]
Sarah Lee-Jones
15 hours ago

Tesla announced on Tuesday it has hit a milestone of reaching 10,000 Superchargers in Europe. “Tesla owners in Europe now have access to over 10,000 Superchargers, spread over 30 countries,” said the automaker on LinkedIn. “The European network has already grown more in 2022 than any other year, with still 3 months to go,” said […]
Sarah Lee-Jones
19 hours ago