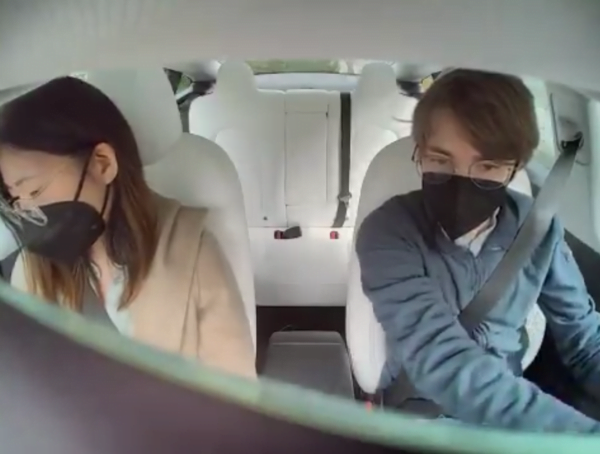 Tesla’s in-cabin camera was recently discovered to have a “full color” RGB picture, based on footage discovered by hacker @greentheonly on Twitter.

The news comes in the midst of larger debates over both the security concerns over the company’s footage, as well as driver monitoring systems, which are expected to help improve Tesla’s autonomy in the future.

Elon Musk has said the in-cabin cameras are for Tesla’s future robotaxi network, to monitor passengers and protect Tesla owners.

If a picture is worth a thousand words, a video must be good for a couple gazillions.
With all the debates about how suitable @Tesla cabin cam for driver monitoring, I will let you form your own opinion.

It does look like "full color" RGB based on the red elements@rice_fry pic.twitter.com/oG4tv4WcRO

While the in-camera footage frame includes the driver’s eyes, head positioning, and general movements, it doesn’t seem to include the steering wheel, infotainment screen, or anything far to the driver’s bottom right.

In addition, drivers can position the visor in such a way that the camera blocks their face, though it would be hard to pull off without being able to see their own in-cabin camera stream.

Green predicts that the Tesla footage can garner a lot more information than if it wasn’t in color or if it was only focused on the driver’s eyes.

We also see how the in-cabin camera looks at night:

I was a bit surprised that in a city at night there's enough environment lighting to make DM seem very workable.
All these videos are full resolution, 36 fps as Tesla uses them. pic.twitter.com/L4V0fw2WkX

Here’s a view of a passenger sitting in all seats of the car:

Passenger in all seats and moving around a bit pic.twitter.com/7rqnQy0udL

The in-cabin camera is located within the rearview mirror on Tesla’s Model 3 and Model Y. For paranoid Tesla owners, some are buying covers on Amazon to block the camera, despite the latter not being in use yet. It’s unclear when Tesla’s fully-functional robotaxi network will come to life, despite being promised years in the making.