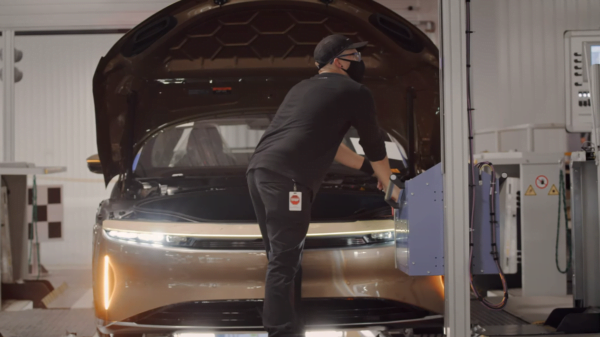 On Wednesday, Lucid Motors released brand new footage from inside its AMP-1 factory in Casa Grande, Arizona, where it will produce the Lucid Air electric sedan.

The dedicated electric vehicle (EV) factory plans to begin delivering Lucid Air units by the second half of 2021, and in this first look from behind the scenes, we can see the inner workings of the general assembly production, which combines the body, powertrain, and interiors of the Lucid Air.

Art Schlaud, Lucid’s Director of Manufacturing for General Assembly said in an issued statement to Tesla North, “We do have some robots and we do have automation, but this vehicle is put together by humans. And it takes real craftsmanship.”

The Lucid Air is set to have 406 miles of range, and will start at a price of $77,400 (USD). Last summer, Lucid also shared that it expects the Lucid Air Range variant to go up to 517 miles on a single charge.

Lucid recently sold out of preorders for the Lucid Air Dream edition, later announcing that it had 500 reservations for the limited-time variant of the electric sedan.

While the Lucid Air is a direct competitor to Tesla’s Model S, the company has also said it plans to release a Tesla Model 3 rival, though not until 2024 or 2025.