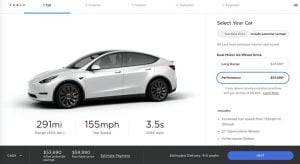 Among Tesla’s most-anticipated electric vehicle (EV) variants is the Long Range (LR) Rear-Wheel Drive (RWD) Model Y crossover, which CEO Elon Musk said last year would be coming “in a few months.” However, in February, many customers who pre-ordered the variant were told by Tesla to select other editions of the EV, because the LR RWD variant was no longer available.

A new report from The Driven holds that there still could be hope for Tesla’s LR RWD Model Y, as the California Air Resources Board (CARB) published executive orders for the variant on Thursday. The documents signify that Tesla could be gearing up to offer the Model Y LR RWD, despite earlier claims that the variant was being axed.

The CARB document falls under order number A-374-0033, and it shows that the Model Y variant had not been previously certified by the board as a zero-emissions vehicle. The document also shows that the Model Y LR RWD has a range of 470 miles, compared to the Long Range and Performance models, which offer 445 and 447 miles per charge, respectively.

It’s also worth noting that the Environmental Protection Agency (EPA) rating may be just 70% of the air board’s listed range, meaning that the Model Y LR RWD will likely be listed near 329 miles of range.

Tesla and Edmunds went back and forth over a Tesla’s actual range earlier this week, which the EV company claimed had a “fixed safety buffer” after a vehicle’s battery indicator displayed zero – later debunked in a follow-up test from Edmunds.