While the Environmental Protection Agency (EPA) puts in place range estimates for every electric vehicle (EV), these numbers are not always precise. This results in range anxiety for EV owners when they aren’t certain that their cars will drive as far as they claim to.

After Tesla disputed a claim from a February report that its cars don’t meet the set EPA standards, Edmunds followed up with a range anxiety test, which sought to test EVs from Tesla, Ford and Volkswagen on their range performances compared to their EPA estimates. What they found was that only two of the six Teslas tested would hit their EPA estimates with a battery-indicated zero miles remaining.

While Tesla’s original dispute held that Edmunds’ tests had been flawed because the vehicles were driven to an indicated zero, rather than until a vehicle stopped, the new round of testing sought to do just that.

The team charged each EV to 100% overnight and maintained 65 miles per hour throughout the track tests. They drove each vehicle until they indicated 0% battery, then continued until they stopped driving.

They found that, while Teslas did drive the furthest after the battery indicator said 0%, all three of Tesla’s vehicles fell short of their EPA range ratings. This was compared to Ford and Volkswagen’s EVs, which both exceeded their EPA range estimates, and ultimately showed that there is no fixed buffer between Tesla’s different EVs. 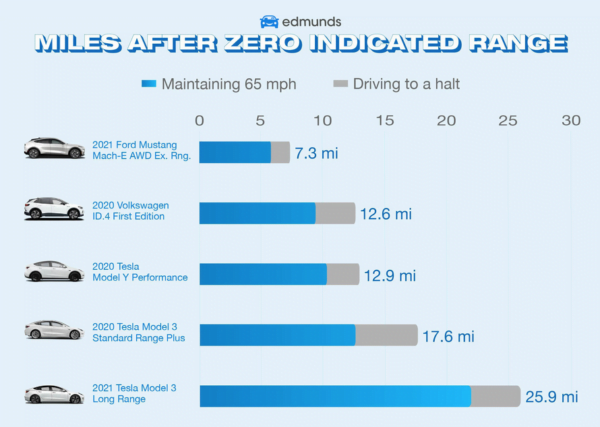 Tesla told Edmunds there was no fixed range buffer on its vehicles and many factors can change the distance driving past 0%:

Tesla engineers told Edmunds, “for these reasons, the buffer cannot be defined exactly to a number every time — it will change based on external conditions, driving profile, etc.”