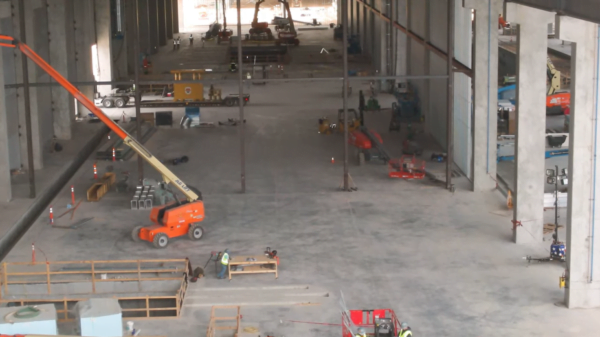 Tesla CEO Elon Musk announced earlier this week that a Cybertruck update was probably coming in 2021’s second quarter, which means that Gigafactory Austin must be nearing completion.

In fact, it appears that the inside of Gigafactory Austin is really coming together, as we can see in a new drone video from Jeff Roberts on YouTube.

The video, which features 4K drone footage of both the inside and outside of the Texas factory under construction, gives us a good look at how far the site has come in well under a year, and with (hopefully) just a few more months to go before completion.

While we can see the site coming together on the outside, with a number of new, completed footers ready for structural development, the highlight of the video is the drone’s shots from inside the factory, where we can see the factory really coming together and alive with workers, lift trucks, steel beams in place, and more walls set to go up soon.

Originally, Tesla’s Cybertruck was set for completion at the same time as the Austin Gigafactory, but the last we’ve heard from Musk is that the truck will be ready for delivery by the end of 2021, with a new update “probably” coming in Q2 2021. In any case, the highly-anticipated truck should still be coming this year, unless anything else is set to change.

You can watch the full Jeff Roberts drone video of the inside and outside of Gigafactory Texas below.