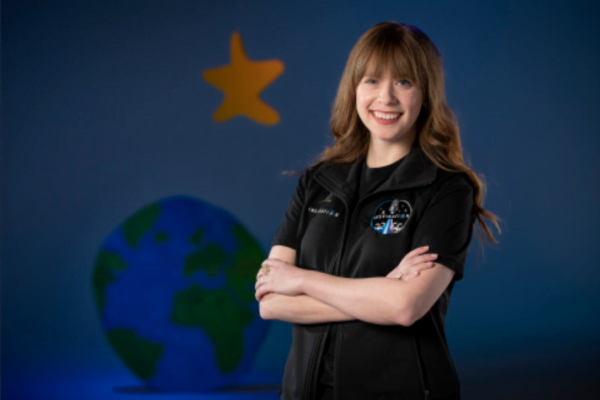 Space travel has become an exciting topic in this day and age, with a brand new rover on Mars, NASA’s moon oupost set to launch in a few years, and the very first all-civilian space crew already appointing two members.

In a press release Monday, Inspiration4, the world’s first all-civilian space mission, announced its first crew member. Hayley Arceneaux, 29, of Memphis, Tennessee, was treated for bone cancer as a child at St. Jude, and will now join the Inspiration4 mission alongside commander Jared Isaacman.

In the spacecraft, the mission has elected to dedicate its four seats to four different messages of purpose and inspiration – with Arceneaux representing the ‘Hope’ chair, which was one of two chairs donated by commander Isaacman, who is a 38-year-old CEO of Shift4 Payments, as well as being an accomplished pilot.

Arceneaux said, “It’s an incredible honor to join the Inspiration4 crew. This seat represents the hope that St. Jude gave me—and continues to give families from around the world, who, like me, find hope when they walk through the doors of St. Jude.”

The mission is set to take place late this year, with the crew undergoing commercial astronaut training through SpaceX. In any case, going to space at all is quite the exciting cause, but this first all-civilian mission will particularly be dedicated to something else important – the expansion of St. Jude’s hospitals to help save even more children worldwide.

A new Starlink dish just dropped, this time featuring a wider range of weather capabilities for use in harsh marine conditions. SpaceX released a new Starlink dish for marine customers this week, featuring an overall flatter design and a much higher wind resistance, as can be seen on the company’s website (via @Sawyer Merritt). The […]
Peter McGuthrie
4 days ago

One Starlink subscriber impacted by Hurricane Fiona in Canada has reported that the service’s second-generation “Dishy” terminal successfully weathered the storm and came out unscathed (via Reddit). Starlink is a high-speed satellite broadband service from SpaceX. Customers set up their Starlink terminals in clear view of the sky, and these terminals then communicate with satellites […]
Nehal Malik
6 days ago