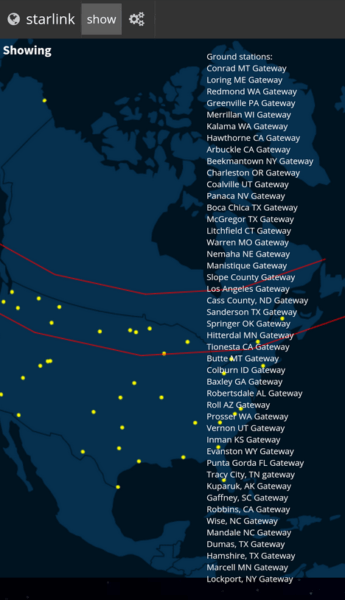 An updated list of Starlink ground stations, suggesting that the company may be preparing to expand its beta service offerings. Photo: Collected on satellitemap.space by Reddit user u/shwifty221

SpaceX recently completed another Starlink launch, and the satellite internet service provider (ISP) has already been rolling its beta out to a number of new regions, specifically the United Kingdom.

Sunday, an updated list of Starlink ground stations from satellitemap.space was posted to the Starlink subreddit, showing a number of new Starlink gateways throughout the U.S.

While the new ground stations have been gradually being installed over the past few months, many throughout the US have just become visible on satellitemap.space within the past few days.

There are now 420 operational Starlink satellites 🛰 😉

Whether or not the website’s appearance of new stations means a fresh rollout of the beta, it’s exciting to see, and confirms many newly-activated Starlink ground stations. With a number of customers now receiving invites to the low-Earth satellite ISP’s beta, it seems only a matter of time before the service becomes publicly available.

Amazon’s space company Blue Origins has also unveiled its own plans to offer satellite internet service, called Project Kuiper, and is expected to compete directly with SpaceX’s Starlink in the years to come. But so far, Starlink has a huge lead on Project Kuiper.

Regardless, new ground stations for SpaceX’s Starlink are a good sign for eager low-Earth satellite enthusiasts, and especially for those in remote locations that don’t receive high-speed internet access.

SpaceX recently revealed it has 10,000 Starlink internet beta users and the company plans to launch a phone service in the future. The next SpaceX launch to send more Starlink satellites to space is set for the end of this week sometime.

SpaceX and NASA signed a Space Act Agreement dated September 22 to study the Hubble Telescope for a potential reboot mission, as detailed in an announcement on Thursday. The idea would potentially boost the Hubble Telescope to orbit at a higher altitude using SpaceX’s Dragon spacecraft for no extra cost to the government. The plans […]
Peter McGuthrie
14 hours ago