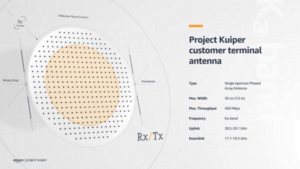 Amazon space hardware company Project Kuiper hopes to go head-to-head with SpaceX’s Starlink, and they have a new, low-Earth orbit user interface prototype reaching speeds up to 400 Mbps to show forth, as reported by Ars Technica.

Amazon was approved by the Federal Communications Commission (FCC) to launch 3,236 low-Earth orbit satellites. The company utilizes Ka-band equipment, which requires a greater distance of physical separation between the transmit and receive antennas to cover the whole of its frequency range.

Amazon said, “Ka-band phased-array antenna is based on a new architecture capable of delivering high-speed, low-latency broadband in a form factor that is smaller and lighter than legacy antenna designs.” The company continued, saying “[The] prototype is already delivering speeds up to 400Mbps.”

In contrast to @OneWeb and @SpaceX @amazon's @FCC filings for #ProjectKuiper (? https://t.co/hXPEdZOikY) so far only cover Ka band frequencies from 17.7-30.0GHz (see below table).

While it’s unclear when Amazon’s Project Kuiper will become available to the public, the company has planned satellite launches throughout 2021 and 2022. The FCC has granted the company six years to launch and utilize half of its licensed satellite hardware, with a final deadline of July 30, 2026.

Then, the company would have exactly three years to launch the remainder of its satellites. In the past, Amazon was quoted saying it would offer broadband to customers “once the first 578 satellites are launched.”

As rural internet connectivity inches ever closer with companies like Amazon’s Project Kuiper and SpaceX’s Starlink program, remote consumers eagerly await their chance to have access to increased connectivity – and at 400 Mbps, I think people are willing to wait as long as they need.

‘Teslanaires’ Detail How Tesla Vaulted Them into Millionaires