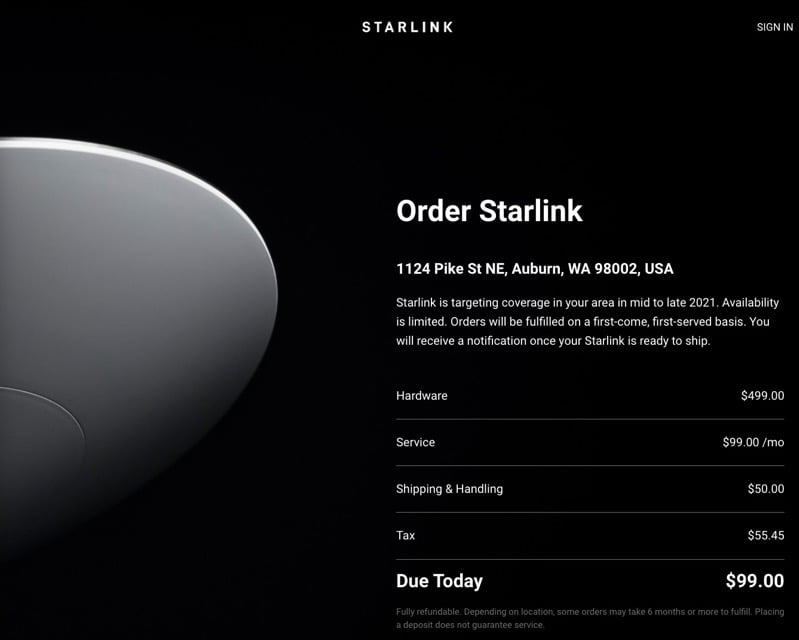 SpaceX has launched pre-orders for its Starlink satellite internet service, allowing anyone to sign up and get on a waitlist, depending on location.

“Starlink is targeting coverage in your area in mid to late 2021. Availability is limited. Orders will be fulfilled on a first-come, first-served basis. You will receive a notification once your Starlink is ready to ship,” says Starlink’s website.

How to pre-order Starlink internet? Just visit Starlink.com, enter an email and then your service address.

You’ll be able to click ‘order now’ to get to the pre-order page, where a $99 USD deposit (or $129 CAD) is required. The checkout says you have 15 minutes to close your transaction.

Starlink costs $499 USD for the required hardware, then a $99 USD per month service fee. SpaceX is charging $50 USD for shipping and handling.

Right now, Starlink internet beta is only available in the U.S., Canada and the U.K. Earlier today, we reported more Starlink ground stations were detected, a sign the beta was set to expand, and now it appears that just may be the case.

In early November, SpaceX announced a new Fair Use policy for its Residential customers in the US and Canada, along with all Business and Maritime customers. The new policy was set to begin in December 2022, but now SpaceX has delayed the policy, according to an update on its website. The plan would offer up […]
Sarah Lee-Jones
7 hours ago

The Federal Communications Commission (FCC) approved SpaceX to launch up to 7,500 next-generation Starlink satellites on Thursday, according to a report from CNBC. “Our action will allow SpaceX to begin deployment of Gen 2 Starlink,” said the FCC. The approval is only for part of SpaceX’s application for Starlink next-gen satellites. The company wanted 10,800 […]
Peter McGuthrie
11 hours ago