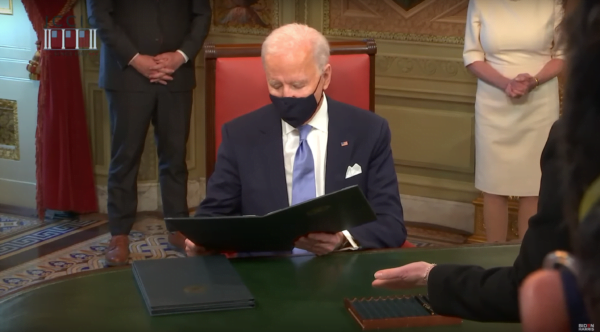 This week has been one for the books, and fortunately for electric automakers, they’re going to benefit greatly from some of its events.

On Monday, President Joe Biden signed the “Buy American” plan, an executive order which directs federal funding towards American goods, including a major investment into the EV industry, as reported by Yahoo Finance.

The order includes replacing old federal vehicles with electric vehicles (EVs), as well as creating millions of jobs in clean energy, according to the legislation. Tesla CEO Elon Musk said he was ‘super fired up’ about the President’s plan.

Traditional automakers Ford and GM have long term EV plans, while Amazon-backed Rivian with its electric delivery vans also look to benefit from the new administration’s green push. GM said yesterday it plans to phase out gas car sales by 2035 and move to all-electric.

Given the current news, President Biden wants to electrify the entire fleet of of Fed vehicles during his term. Expect some state & local governments to do the same. Among the limited EV makers in the US, Tesla is best positioned to benefit from such initiatives.

At the signing, President Biden said, “The federal government … owns an enormous fleet of vehicles, which we’re going to replace with clean, electric vehicles made right here in America by American workers, creating millions of jobs — a million autoworker jobs in clean energy — and vehicles that are net-zero emissions.”

Tesla, being the only EV company with a full lineup of cars on the road, stands to benefit immensely from the order, as it’s an unmatched dominant force in both the EV and general auto markets, at least for the time being.

In any case, we’ll be watching history unfold for the next several years, as EVs move to become the norm in the auto industry.