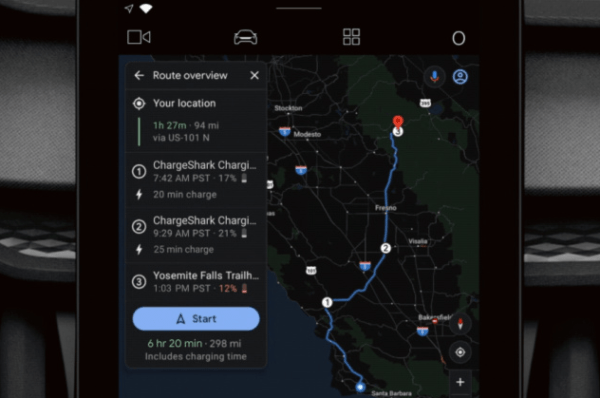 On Wednesday, engadget reported that EVs with Google Maps built-in will make it easier for drivers to plan their trips around charging stations.

Google’s using graph theory in combination with the latest routing algorithms to help determine the best route. In addition, routes and road trips that require multiple charging stops will cause the app to analyze thousands of public charging stations, spitting out the most efficient route within 10 seconds.

"Today, we present a new approach for routing of EVs integrated into the latest release of Google Maps built into your car for participating EVs that reduces range anxiety by integrating recharging stations into the navigational route." $GOOG $GOOGL https://t.co/EDp5hSYkR1

EVs that currently come with Google Maps built-in include the Polestar 2 and the Volvo XC40. On top of the new navigational features, these EVs also permit Google Maps to tell the driver what kind of payment is accepted at charging stations in eight different European countries, with more to be added down the line.

Other apps like A Better Route Planner have sought to offer similar navigational features, albeit with fewer resources and manpower with which to work than Google has at its disposal.

In any case, it’s a noble goal to help EV drivers map out their routes, especially with the added need for charging along the way on longer trips. And now, drivers can use Google Maps to plot out complex road trips, without wasting a second.