Tesla has announced its Q4 2020 numbers and the company “produced and delivered half a million vehicles, in line with our most recent guidance.”

The company also noted, “in addition, Model Y production in Shanghai has begun, with deliveries expected to begin shortly.”

Q4 saw 180,570 Teslas delivered, a record for the company. You can see from the breakdown below, the newer Model 3 and Model Y took up the bulk of production and deliveries, as the older Model S and Model X demand waned. 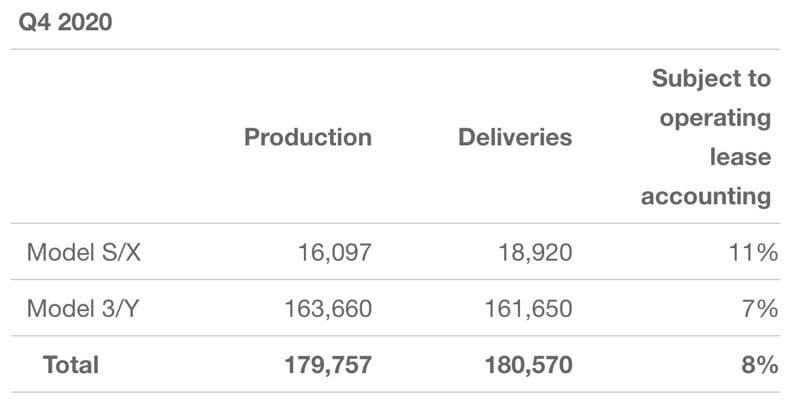 Tesla hit 499,550 deliveries for 2020, officially falling short of half a million but if we round up, it’s an incredible achievement for the company, especially in a year with a pandemic that affected all automakers.

“Our delivery count should be viewed as slightly conservative, as we only count a car as delivered if it is transferred to the customer and all paperwork is correct. Final numbers could vary by up to 0.5% or more,” explains Tesla. It will be interesting to see the official final numbers, at Q4 earnings. 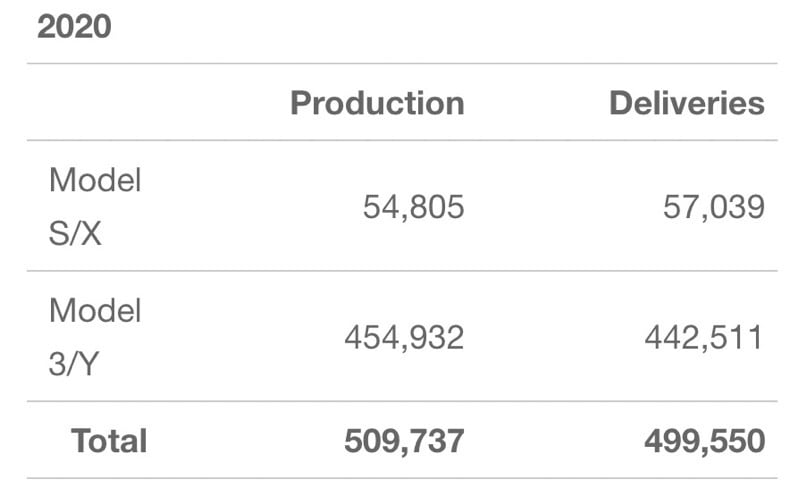 “Thank you to all of our customers, employees, suppliers, shareholders and supporters who helped us achieve another great year,” said Tesla.

Tesla CEO Elon Musk said, “So proud of the Tesla team for achieving this major milestone! At the start of Tesla, I thought we had (optimistically) a 10% chance of surviving at all.”

So proud of the Tesla team for achieving this major milestone! At the start of Tesla, I thought we had (optimistically) a 10% chance of surviving at all. https://t.co/xCqTL5TGlE

Tesla is responsible for 2/3 of all the personal & professional pain in my life combined. But it was worth it.

Huge team effort! We were out there until the last day of the year driving cars to customers’ homes https://t.co/vFqjSgj0RH

Back in 2014, Musk predicted Tesla would hit 500,000 vehicles produced in a year, a major milestone for the company. With Gigafactory Shanghai now producing Model Y in China, 2021 is looking very bright for Tesla, especially with new factories in Berlin and Austin set to go online later this year.