Comma.ai was founded by George Hotz, known in the hacking community as ‘geohot’, the first person to SIM unlock Apple’s original iPhone in 2007 and reverse engineer Sony’s PlayStation 3.

Hotz’s artificial intelligence startup was founded in 2015, known as Comma.ai, aimed at creating autonomous driving technology, available to consumers. The latest is the company’s Openpilot system, available off the shelf for $999 USD.

“We hear you are extremely confident that you’ll have level five next year (no longer need to pay attention at all). Want to wager $10k on that? We think you’ll win, but not that fast,” said the @comma_ai Twitter account. 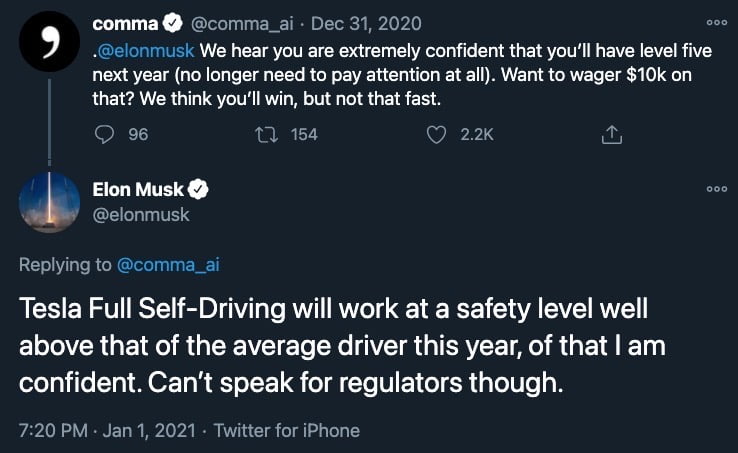 Musk responded this evening by saying, “Tesla Full Self-Driving will work at a safety level well above that of the average driver this year, of that I am confident. Can’t speak for regulators though.”

Tesla Full Self-Driving will work at a safety level well above that of the average driver this year, of that I am confident. Can’t speak for regulators though.

Just this evening, comma.ai replied (we’re assuming it’s Hotz), “I’m fine with that as the bet. We’ll buy a Model 3 with FSD. l’ll supervise it driving me around for a month next January, no disengagement you win, any safety disengagement or user action required to get to destination we win. Will post video proof to claim. Deal?”.

As of writing, Musk has not replied to the challenge from comma.ai.

Last year, Hotz told Lex Fridman in an interview, “Tesla is going to win Level 5”, referring to full autonomy without any human intervention. Musk replied at the time, “Thanks George!”.

Back in 2015, Musk tweeted out a statement from Tesla, a “correction” to a Bloomberg article which profiled Hotz and comma.ai, noting the story “did not correctly represent Tesla”.

“We think it is extremely unlikely that a single person or even a small company that lacks extensive engineering validation capability will be able to produce an autonomous driving system that can be deployed to production vehicles. It may work as a limited demo on a known stretch of road — Tesla had such a system two years ago — but then requires enormous resources to debug over millions of miles of widely differing roads,” said the unsigned blog post from Tesla.

Last month, Musk said he was “extremely confident” Tesla would release Full Self-Driving in 2021 to its customer base, during a sit-down interview at his 2020 Axel Springer Award acceptance.

No matter what happens, the autonomous driving race is in full swing as each month passes. So far, Tesla’s Full Self-Driving beta has impressed (but it’s still not perfect) and other competitors are trying to match Elon Musk’s advances.