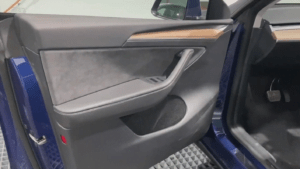 After months of anticipation, the Tesla Model Y has launched in China, and so far, it’s looking great.

Tesla’s made-in-China (MIC) Model Y begins delivering this month, and it includes a number of exciting updates, as seen in first-look videos from Twitter user @ray4tesla.

Among the differences in the 2021 Model Ys, which were produced at Gigafactory Shanghai, are a heated steering wheel, a HEPA filter for Bioweapon Defense Mode, wood paneling on the interior front driver and passenger doors, and the same new center console as the 2021 Model 3 recently received.

These prices are fairly affordable, especially considering China is Tesla’s largest market, placing the California-based company in direct competition with local EV startups like NIO, Xpeng Motors, and Li Auto, among others. Each of these companies also has its own SUV model, so Chinese consumers have a range of electric SUV options.

Still, this competition didn’t stop Tesla’s cars from being 2020 top-sellers in China, and it’s not likely to do so in 2021 either.

The new 2021 MIC Model Y is now available in China, and there’s never been a better time to go electric than right now.