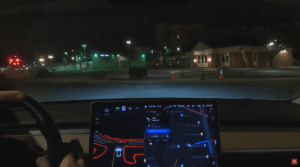 Tesla’s Full Self-Driving (FSD) beta version 9 has now been released for a couple of days, and it’s already shown to be quite the improvement from the system’s last update (note, he incorrectly refers to this build as version 8).

In a video uploaded Wednesday by YouTube host Dave Mac, Dave shared the second part of his FSD beta 9 first impressions video. In it, he drives with the FSD beta 9 update activated, and shares a number of improvements that he notices along the way.

Among the improvements, Dave notices that the vehicle seems to be recognizing road signs a little more clearly than the FSD beta 8 did. This includes an intersection that previously had a no turn on red sign lit up, though this time through it simply showed a green arrow, allowing Dave to turn.

As the Full Self-Driving system continues to improve, one of the major places it will need to improve to become fully-functional is in parking lots. To this day, we’ve yet to see an FSD-activated Tesla perform even moderately well within a parking lot. Hopefully, by the time the system is fully released and no longer in beta, parking lots will go a little more smoothly.

Below are a couple of other first FSD beta 9 drives as well:

It’s kind of amazing to see how far the FSD system has come by beta version 9. While it’s still in beta, and will likely still be well into 2021, it’s showing some impressive upgrades from where it started, and being able to let the car drive itself at all feels like the futuristic reality of 2020 we deserve.

One of the most impressive FSD beta 9 demos is the recent drive from San Francisco to Los Angeles with zero interventions.

Tesla’s latest version of the Full Self-Driving (FSD) beta can detect certain kinds of Autopilot-defeat devices and the company plans to adapt the version according to new methods discovered over time, reports @Teslascope. If detected using such devices, the FSD beta’s software version 10.69.3.1 will force Autopilot disengagement and it will result in strikes against […]
Peter McGuthrie
50 mins ago