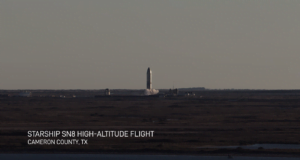 A new video tweeted by SpaceX and CEO Elon Musk on Wednesday shows the company’s Starship SN8 rocket take off from the Cameron County, Texas launch site. The video shows an Earth-shattering new maneuver, which the company claims will allow rockets to land on any surface, even without the use of a runway.

The breakthrough includes the use of specific landing burners, as well as a graceful “flip maneuver” in which the rocket completely reorients its own direction, ultimately falling in the same direction as at launch before landing again.

Although the rocket does seem to burn up at the end, it’s still an incredible show of new rocket technology, and is a precursor to Musk’s mission to land humans on Mars.

Musk shared the video and said, “12 story rocket turns off its engines and does a controlled fall,” which is an incredible feat.

12 story rocket turns off its engines & does a controlled fall https://t.co/HCRgyx42rn

The video ends with the text, “Next up: SN9.” The next prototype, SN9, is already complete and will soon have its own test launch, building on the data acquired from the historic SN8 launch.

In the video, SpaceX writes, “SN8 demonstrated a first-of-its-kind controlled aerodynamic descent and a landing flip maneuver.” The company continues, “Together these will enable landing where no runways exist including the moon, Mars, and beyond.”

You can watch the full Starship SN8 flight recap from SpaceX below: