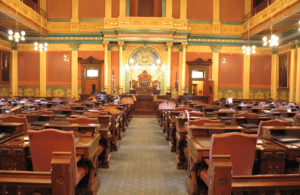 Lucky for electric vehicle (EV) companies like Tesla, Lucid, and Rivian, Michigan House Bill 6233 has been left in the dust.

On Monday, a Lucid spokesperson revealed to CNET that Michigan House Bill 6233 had died in its final week of potential legislation. The bill, which was to effectively ban non-Michigan companies like Tesla, Lucid, Rivian, and other EV companies, did not pass the rest of the way through the state Senate, and will no longer be able to be signed into law.

The near-miss indicates new hope for electric vehicle (EV) companies, including Lucid, which would have otherwise lost access to the Michigan auto market entirely.

In a statement, Lucid wrote, “Lucid Motors is pleased that HB 6233 failed after the Michigan Senate ended its session without taking action on the bill.”

They continued, “The legislation passed by the Michigan House of Representatives was anticompetitive and undermined consumers’ access to different products and consistent, dependable automotive service. These legislative efforts – and similar efforts in other states – are clearly driven by special interests, not consumers, as nearly 70% of all EVs sold in Michigan in 2019 were sold directly to consumers.”

A new Consumer Reports study was also published this week saying that up to 70% of drivers would consider buying electric – many of which would have been directly affected by the bill’s passing.

When we first reported on HB 2633, Tesla was set aside to be protected by the bill. However, a scathing December re-write of the bill had Tesla’s protections removed, placing them among the other banned brands which included fellow EV makers Rivian and Lucid.

In any case, new life exists for EV companies looking to expand in Michigan. And hopefully, no more HB 2633 lookalikes will come along, stunting the world’s transition to zero-emissions vehicles.