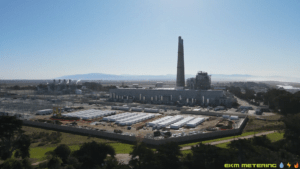 Tesla has been expanding its electric vehicle (EV) operations globally, but EVs aren’t the only electric technology it has set its sights on. With new energy storage solutions recently placed in other parts of the world, Tesla has also been hard at work on an energy storage plant near its California beginnings.

In a video uploaded Saturday, YouTube channel EKMMetering shared a progress video of a Tesla Megapack currently being built at PG&E’s Moss Landing, California electric substation. The Megapack will be made up of 256 Tesla Megapack battery units, taking up space on 33 concrete slabs at the Moss Landing station.

In the video, we see drone footage from above and all around the PG&E Moss Landing station, on which we see the several concrete slabs that will make up the Tesla Megapack. The drone hovers above the in-progress Megapack area a few separate times, before flying out over the nearby water to end the video.

As Tesla works to help PG&E with California’s electrical needs, it also has plans to do the same elsewhere. Soon enough, much of the world will be powered by Tesla’s Megapacks and Powerpacks, ultimately helping balance the electrical grids in numerous locations – a necessary change on the cusp of the world’s transition to sustainable transportation.