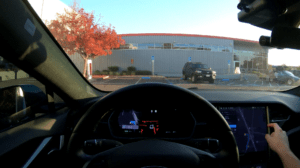 In a new video uploaded on Thursday by YouTube channel AIDRIVR, the driver of a Tesla with Autopilot and the Full Self-Driving (FSD) beta (2020.44.15.3) drives with the autonomous-driving system engaged, while talking about what makes it “human-like.” The host takes the viewer through a number of different scenarios in and around Tesla Fremont.

The video starts with an impressive exit scenario from a busy, complicated parking lot, much like what we’ve seen in some other complex FSD beta videos. The host also talks about some improvements from prior updates, including a better approach to speed bumps, roundabouts, and a number of other small bug fixes.

Near the end of the video, the host expresses his amazement with the update, saying “So what do you guys think of this update? Pretty crazy, right? I am still in disbelief on some of the things I just experienced, and this is just day one of this update, so I can only imagine what the future holds.”

Earlier this week, Tesla CEO stated that he hoped to have FSD beta launched in Canada in December. While it definitely doesn’t seem set in stone, it does seem pretty likely having come from Musk’s mouth.