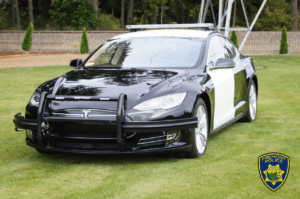 Tesla police cars are popping up around the US right now, and one of the first pilot programs has been determined a success by a California Police Department.

On Thursday, the Fremont Police Department released information on its pilot program, which used a Tesla Model S as a patrol car, and the department has determined that it will, in fact, purchase an entire fleet of zero-emission police patrol vehicles, as shared in a statement (via CBS).

In its report, the department wrote, “After careful review, the Pilot Program was determined to be a success. The police patrol electric vehicle met the needs of police services,” the department said in its report released Thursday.

Speaking of fleets, Fremont piloted a Tesla Model S 85 #EV as part of their police dept. fleet. What they found:

$4,097 in fuel savings compared to a gas-powered Ford;

27 more days on the road, rather than in maintenance;

Sean Washington, Department Captain, said, “The final results from the one-year Electric Patrol Vehicle Pilot Program have been encouraging as the City of Fremont continues to look for cost-effective ways to help make Fremont more sustainable.”

During the program, the Model S consumed a total of $1,036 (USD) in energy, while the annual cost of gas for the average Ford patrol car totaled roughly $5,133 annually.

Police have said they may be looking to the Tesla Model Y for its fleet, citing a lower starting price, increased range, improved storage, and a higher clearance level – all benefits to a police officer looking to stay ahead of the curve.

Tesla’s brand retains customers better than other automakers, and it tends to steal customers from other brands, according to new data shared by S&P Global Mobility last week (via @Umbisam). The data measures a 12-month period leading up to July 2022, looking at how drivers purchased — whether switching to a new brand, or remaining loyal […]
Peter McGuthrie
3 hours ago

Tesla is offering a new discount that could slash prices even further for previous brand owners, with a new trade-in deal available for new Model S and X vehicles. U.S. buyers of the Model S and X who trade in an old Tesla vehicle are now eligible to receive $3,000 off the price tag or […]
Peter McGuthrie
4 hours ago

Tesla has made a Twitter account for its Megapack commercial battery packs, showing as @Tesla_Megapack, and in the bio it says “large-scale energy storage,” as first spotted by @SawyerMerritt (via @Tslachan). At the time of writing, the account has yet to make any posts, has about 1,390 followers and only follows three other accounts: SpaceX, […]
Peter McGuthrie
4 hours ago