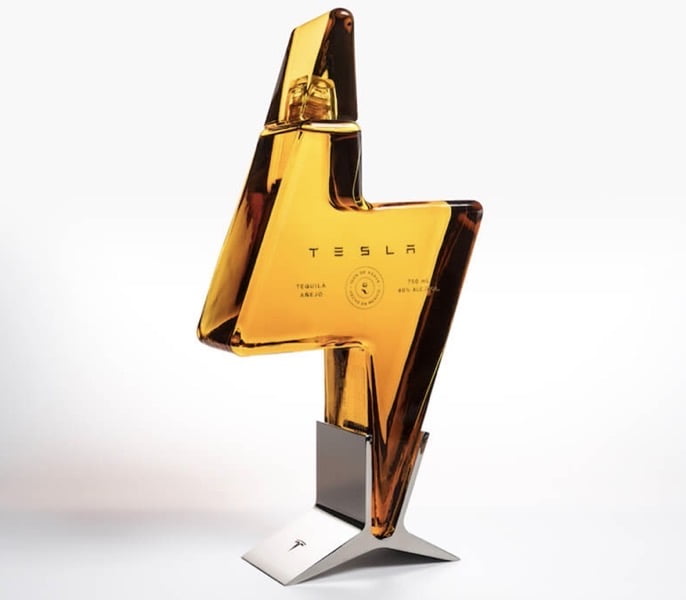 Are you dreaming of buying Tesla Tequila outside of the United States? Well, it won’t be coming confirmed Tesla CEO Elon Musk on Thursday morning.

“Unfortunately, there are too many rules around liquor distribution, even in the US. However, we will be selling the lightning bottle & shot glasses worldwide.”

Unfortunately, there are too many rules around liquor distribution, even in the US. However, we will be selling the lightning bottle & shot glasses worldwide.

You read that right. While selling the ‘Teslatequila’ may be an issue, selling the empty lightning glass bottle and shot glasses should be fine, says Musk.

Tesla Tequila started out as an April Fool’s Day joke from Elon Musk back in 2018, but has since become a reality, much to the pleasure of Tesla fans. But sale of the liquor is restricted to certain states in the U.S.

It’s unclear how much Tesla will charge for an empty lightning Tesla Tequila bottle and shot glasses. Given the prices we’ve seen for Tesla accessories and such, we’ll be lucky if it’s under $100 USD??

Here’s a list of all the new Tesla Superchargers that opened up across the globe between January 19 and 25, 2023, courtesy of data from Supercharge.info and the TMC Forums: Date Opened Location Number of Stalls Power Rating Official Listing January 19, 2023 The Village at Sandhill at 494 Town Center Pl, Columbia, SC, USA 12 250 […]
Nehal Malik
3 hours ago

Tesla announced its fourth-quarter and full-year 2022 earnings on Wednesday afternoon, reporting record revenue for the final quarter. The automaker reported revenue of $24.3 billion USD for October to November 2022, up a whopping 37% year-over-year. Wall Street, meanwhile, had forecasted $24.03 billion in revenue. Tesla reported a net income of $2.3 billion (GAAP) for […]
Nehal Malik
6 hours ago

A new bill proposal could cease the eligibility of most electric vehicles (EVs) for the $7,500 federal tax credit, if they do not meet specific battery component rules, according to a report from Automotive News Canada on Wednesday. The bill is expected to be introduced by U.S. Senator Joe Manchin (D-West Virginia) on Wednesday, with […]
Peter McGuthrie
9 hours ago