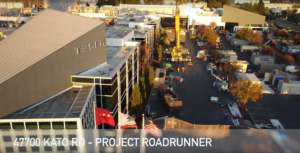 Tesla has a lot going on all around the world right now, so it’s easy to forget the exciting looks and developments still ongoing at its Fremont Gigafactory, including a really, really big casting machine.

In a video uploaded Friday, YouTube channel Gabeincal shares fresh looks at Tesla Fremont’s Roadrunner Project and Gigacast Buildings via drone footage above and around the factory.

In early shots of the video, we largely see the parking lots and buildings which surround the Tesla Project Roadrunner, as well as continued construction on parts of the building. The video also shares updated footage from Tesla Fremont factories, both north and south locations, the latter of which is home to the Gigacast casting machine.

Earlier in the year, Tesla named Richard Miller as the Fremont factory’s newest production head, and the company has done a lot since. With its ongoing Roadrunner Project under construction and factories being built in other parts of the country and the world, Fremont is still producing cars like crazy and preparing for upcoming battery supply needs as the company continues to grow.

In any case, it’s always pretty cool to see such a big casting machine and general operation, all for the sake of electric vehicles.