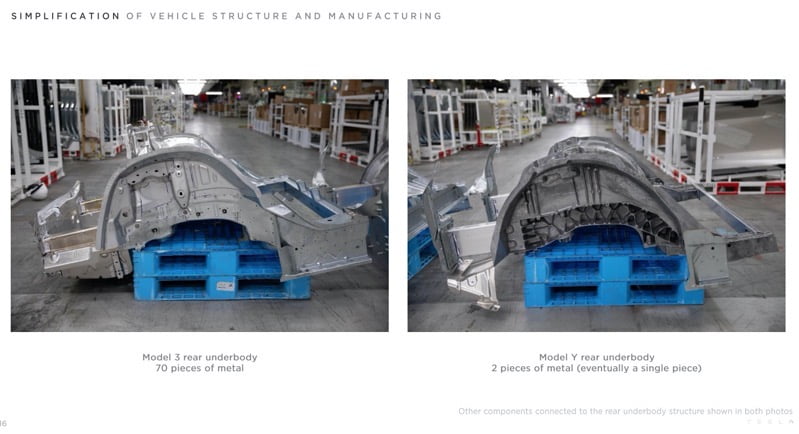 During Tesla’s Q1 2020 earnings release, the company shared how the Model Y rear underbody was made from two pieces of metal, and would be eventual be a single piece, thanks to a new casting machine.

Compared to the Model 3 rear underbody at 70 pieces of metal, a new “giga press” used by Tesla for Model Y would increase production efficiency in a major way.

This morning, Tesla CEO Elon Musk responded to a tweet from @WholeMarsBlog, with the latter citing the company’s single piece casting machine had been installed at its Fremont factory in California.

Will be amazing to see it in operation! Biggest casting machine ever made. Will make rear body in a single piece, including crash rails.

Musk replied, “Will be amazing to see it in operation! Biggest casting machine ever made. Will make rear body in a single piece, including crash rails.”

Tesla will be sourcing the large machine from Italian company IDRA Group, with the EV maker being the first customer for the massive OL6100 CS casting machine.

This casting machine has an upgraded locking force to handle Tesla’s special casting, while it also measures 64 feet long (19.5m) and 17 feet tall (5.3m), weighing in at a whopping 401 tons.

“The single-piece casting has no CNC machining—it doesn’t even have datums. It took us a lot of iterations, by the way, to get there” said Musk on Third Row Tesla Podcast back in April .

Musk also previously described the huge casting machine as, “It’s the size of a small house, basically,” adding, “it has a big effect on the ease of manufacturing.”

A giant casting machine able to make a rear body in a single piece will save labor costs and reduce footprint for Tesla’s factory. Musk previously stated the IDRA machine will decrease its body shop size by 30% and will eventually transfer to the Model 3 well.

The cons of producing a vehicle with a single piece for the rear body? If there’s a major accident, castings don’t repair well and the entire vehicle could be written off. Alas, that’s the price to pay for driving a piece of technology from the future, today.