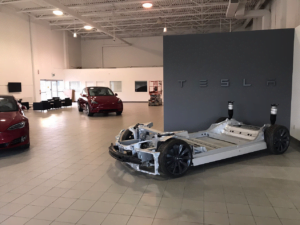 With new Tesla showrooms, service centers, factories, and Superchargers going up around the world, Tesla customers are getting increased chances at having their Tesla’s purchased, serviced, or charged, nearer their home, and the shift couldn’t come soon enough.

A new picture has surfaced of a new, in-progress Tesla showroom being built in Kitchener, Ontario, according to a post on Twitter. The post, which was shared by Twitter user @TheTeslaLife, depicts a Tesla Model 3, a Model Y, and another, partially-built model of some sort. While the cars will likely be all complete by the time the showroom is finished, it’s still pretty cool seeing a picture of a showroom with an in-progress car body in the middle of the room.

The new Ontario showroom will also include a service center, and comes to the town of Kitchener not long after a number of new Superchargers also arrived to the Ontario location.

It isn’t currently clear when the new Kitchener showroom will be completed, but from the looks of it it’s not far off – at the very least, Tesla may want to finish building that car, first, but we’ll leave that to them.

Update November 11: Looks like the Tesla showroom in Kitchener is now open, according to @TheTeslaLife:

Newest #Tesla Showroom is open for business! Kitchener, Ontario, Canada 🇨🇦 Its a “soft opening” but Sales & Test drives are available now, deliveries later in the year! The showroom is massive, one of the biggest I have seen! Lots of room for S3XY Cars and the coming #Cybertruck pic.twitter.com/6J77RqoF1Z

Over the weekend, Tesla owner and YouTuber Jeremy Judkins evacuated from their Hurricane-Ian-affected North Port, Florida, residence in their Model X Plaid. North Port experienced significant flooding after the storm, and more was expected. Instead of waiting around, Jeremy chose to leave to a safer location in their Model X Plaid. He was able to […]
Nehal Malik
11 hours ago

Tesla has announced its production and delivery numbers for Q3 2022. The company said it produced over 365,000 cars and delivered a record 343,830 vehicles in the third quarter. “Historically, our delivery volumes have skewed towards the end of each quarter due to regional batch building of cars. As our production volumes continue to grow, […]
Sarah Lee-Jones
13 hours ago