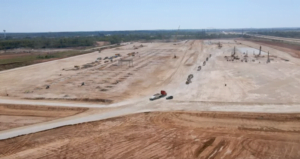 Tesla’s Terafactory in Austin, Texas is set to both produce vehicles and, in a few short years, to mine lithium with which the company will produce its own electric vehicle (EV) batteries. And progress towards these goals is already well-underway.

In a new update posted by YouTube channel Jeff Roberts, 4K drone flyover footage shows progress made on Tesla’s Terafactory Texas as of Sunday morning. The construction site’s progress is impressive since Roberts’ last update, and yet, it feels like there’s still a long way to go.

Probably the most anticipated part of the Austin, Texas factory is the late 2021 release of the Tesla Cybertruck, which is planned to begin being delivered from the Texas factory by the end of next year–and possible early 2022 if there are delays.

In the new video, we see a number of construction workers pumping and pouring concrete into recently-laid rebar areas for the casting footers and stamping press.

Comments on the video speculated as to the comparative progress between Tesla’s factories in Austin, Berlin, and its recently-completed Shanghai site. While Terafactory Texas seems to be moving along a bit more slowly than Berlin is or Shanghai was, it’s also embarking on a slightly different journey by preparing to mine lithium and craft its own batteries.

However long the Texas site takes, Tesla is likely looking forward to an exciting 2021 with the release of the Cybertruck, two major factory completions, and probably a whole lot more global sales than it saw in 2020 – and that’s saying quite a lot.