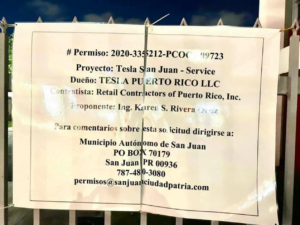 New Tesla service centers, showrooms, and factories are popping up all over the world, with further plans of development already in the works.

According to a post on Reddit, Puerto Rico is now gaining its very own Tesla service center, as depicted by a building permit posted on the fence of the new property in San Juan. The picture was originally shared to the Tesla Motors subreddit by Reddit user u/stryk3r1215, and the service center will mark the first to come to the Caribbean.

Regarding the country’s electric grid, capacity for electric vehicles (EV), and the potential of owning a Tesla Powerwall, the user commented, “Unfortunately, our country is broke. The government is privatizing the power authority, and microgrids are expensive.” The user continued, “Hell, even for me, a PowerWall would be about $12k without any solar powerwalls. They are a lot more expensive here than in the mainland US. I myself will probably get the solar panels first and go net-metering, and once I’ve saved up I’ll get a PowerWall, hopefully by then there will be a newer generation PW.”

While Puerto Rico still has a long way to go before its residents can use EVs as the standard, the move of a Tesla service center there is a big step in the direction of sustainable transportation.

More electric vehicles (EVs) are set to be sold in China this year than throughout the rest of the world combined, according to an exposé from The New York Times on Monday. As many countries struggle to incentivize EV sales using tax credits and subsidies, China’s customer base has already begun to pivot toward the […]
Peter McGuthrie
18 hours ago

A coming software update has added a useful pop-up feature for Tesla’s Superchargers, showing new details that weren’t previously included. Tesla software update 2022.36 includes a newly designed pop-up map feature for Supercharger locations, as detailed by Not a Tesla App on Monday. The pop-up map includes information such as the number of available charging […]
Peter McGuthrie
19 hours ago

Tesla’s official CCS Combo 1 adapters have begun delivering to customers, as noted on Monday by a Model 3 owner (via Reddit). The CCS adapter costs $250 in the U.S. and $325 in Canada, offering up to 250 kW at third-party charging stations where Tesla’s proprietary Supercharger connections aren’t available. Tesla launched official sales of […]
Peter McGuthrie
19 hours ago