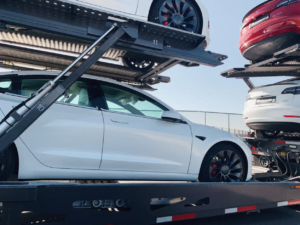 2021 Model 3 Performance out for delivery from the Fremont factory. Photo: u/ruffells on Reddit

The 2021 Model 3 refresh is coming, and the electric vehicle (EV) will be getting a number of exciting updates.

User u/ruffells shared a photo on the Tesla Motors subreddit of the new 2021 Model 3 Performance out for delivery, just outside the Fremont factory. Users on Reddit agreed that the Model 3 was likely for international delivery, given that Tesla usually produces its exported models first, due to the amount of time it takes to deliver them internationally. You can also see the European plate holder area in the vehicle in front of it.

Among the new features, the 2021 Model 3 Performance features new tires, as well as a major chrome delete, a new center console, and other changes.

Tesla doesn’t do year-to-year model changes, but rather, the EV company does what it’s called “incremental changes,” refreshing small elements as they go, rather than releasing a new model each year.

While the Model S and Model X received no major refreshes for the 2021 models – aside from the release of the highly-anticipated Model S Plaid – CEO Elon Musk had previously mentioned that the companies would be refreshing their lines.

Whether or not the Model 3 depicted above is for international or US delivery, it’s exciting to see the 2021 Model 3 Performance in action.