First Starlink Internet Public Beta Invites Being Sent Out in the U.S. 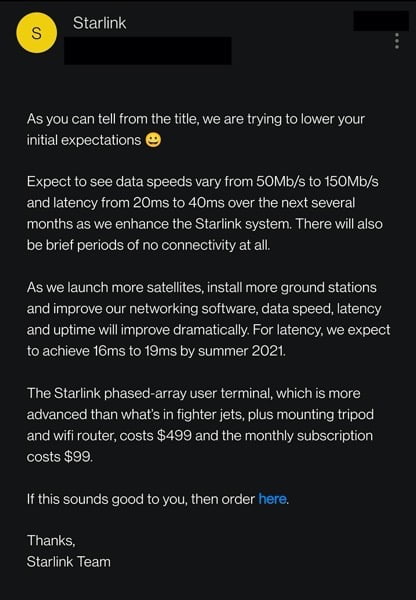 SpaceX has started to sent out Starlink internet public beta invites, with one of the first targeting those in Washington state in the United States.

According to those invited, the Starlink beta is called “Better Than Nothing Beta” and details estimated speeds of 50 Mbps to 150 Mbps, to go with estimated latency of 20ms to 40ms, by summer 2021.

The public beta pricing is $499 USD for the phased array antenna and router, while the subscription price is $99 USD per month. There is no mention of data caps.

According to Reddit user ‘FourthEchelon19’, they received the email tonight at 7:38PM PDT, located in eastern Washington State. “Placed my order that came to nearly $600 after shipping ($50) and tax. Then I had to place a second order for the ridgeline mount for another $100. Worth it!”, said the user.

Others also received the Starlink beta invites in:

A screenshot of the email can be seen above, which says “as we launch more satellites, install more ground stations and improve our networking software, data speed, latency and uptime will improve dramatically. For latency, we expect to achieve 16ms to 19ms by summer 2020.”

Just on Sunday, SpaceX celebrated its 100th successful flight as Falcon 9 launched yet another 60 Starlink satellites into space.

Starlink internet is also going to be provided free to a rural school district in Texas.

SpaceX CEO Elon Musk stated earlier this month he hoped the public beta for Starlink would be coming soon in the northern U.S. and ‘southern’ Canada. Recently, SpaceX received a federal government approval for a telecom license in Canada.

Starlink internet is set to bring high-speed and affordable broadband to rural markets in the U.S. and Canada, where coverage can be poor and rates high.

You can also now download the Starlink app for iOS and Android. Here’s what the iOS description says:

Starlink is designed to deliver high speed broadband internet to locations where access has been unreliable, expensive, or completely unavailable. Under Starlink’s Better Than Nothing Beta program, initial service is targeted for the U.S. and Canada in 2020, rapidly expanding to near global coverage of the populated world by 2021.

Did you receive one of these SpaceX Starlink public beta invites?