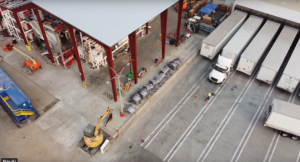 Tesla has been gearing up its production efforts to get ready to begin producing its single-cast version of the Model Y.

The plan to reduce the Model Y underside cast from 70 separate parts to one single cast was announced by Elon Musk earlier this year at Tesla’s Q1 earnings release. The single cast utilizes the biggest casting machine in the world and is set to improve production speed significantly.

According to Musk, the inspiration for the single-body cast was a Hot Wheels version of the Tesla Model Y.

Musk told reporters, “As Sandy accurately pointed out, the rear of the Model 3 looks like a patchwork quilt. It’s not great…” He continued, “The current version of the Model Y has basically two big high-pressure die-cast aluminum castings that are joined. Later this year, we will transition a single piece casting that also integrates the two rear crash rails.”

The machine that makes the machine. 🦾

The casting machine has been dubbed, “The Giga Press,” and there are actually two of them located at Tesla’s Fremont factory. The casting machines each have a clamping force of 55,000 to 61,000 kilonewtons and they were produced by Italian company Idra Group. Tesla Shanghai also has its own version of the Giga Press, which is also in operation.

While Tesla may have struggled a bit with early Model 3 and Model Y production, the new use of single-cast bodies is sure to accelerate production and improve the build itself for future generations of each car.

Tesla’s latest version of the Full Self-Driving (FSD) beta can detect certain kinds of Autopilot-defeat devices and the company plans to adapt the version according to new methods discovered over time, reports @Teslascope. If detected using such devices, the FSD beta’s software version 10.69.3.1 will force Autopilot disengagement and it will result in strikes against […]
Peter McGuthrie
36 mins ago