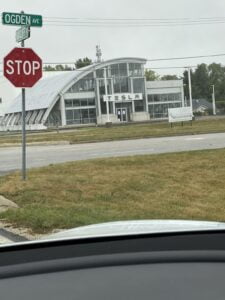 In the continuing saga of Tesla locations popping up all around the world, another showroom is set to open in Illinois.

According to a post on Reddit, a new Tesla showroom and service center to-be was spotted in Naperville, Illinois, built out of what used to be a Hummer dealership.

While the news shouldn’t come as a surprise with so many other Tesla showrooms and factories landing around the world, as well as Battery Day on the horizon and a whole slew of upcoming car releases, one Reddit user commented that the Naperville location would now be the closest service location to their home.

Users commented speculating whether the new Tesla location would be a showroom only or a service center.

One user shared, “I believe the new plan at Tesla is ‘service and delivery’ centers, because they still need to desperately improve their service center coverage. As far as I can tell they’re also getting away from the ‘gallery’ locations.” The user continued, “My personal feeling is that this is also a way around dealership laws. Because service and delivery are appointment only, Tesla can accurately say they’re not selling cars there and not open for sales.”

Whether Tesla is trying to avoid dealership laws or not, the thread seemed generally pleased that a new Naperville location was coming, many of which cited shorter trips for servicing and test drives as something to be celebrated.

Tesla Plans “Substantial Completion” of Texas Gigafactory by May 2021

How Tesla Used Glass to Make Model 3 the Safest Car in the U.S. [VIDEO]