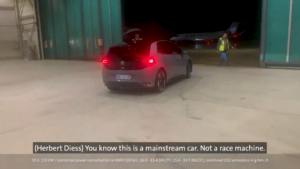 While there have been no shortage of Tesla collaborations, CEO Musk has also been meeting with competitors to get a feel for what’s coming to the market.

In a new video released on LinkedIn by Herbert Diess, Volkswagen’s Board of Management Chairman Herbert Diess is seen in a Volkswagen ID.3 Pro with Tesla CEO Elon Musk.

Herbert Diess amd @elonmusk after driving the ID.3 together.

Even small chats between innovation leaders is great PR for the push towards sustainable energy.

(Elon is so peeky ?) pic.twitter.com/fvf77zKdQk

In the video comments afterward, Diess wrote “Thanks for the visit, Elon! Hope you like the video. It was great driving the ID.3 with you!” He went on to write, “Just to be clear: We just drove the ID.3 and had a chat – there is no deal/cooperation in the making.”

The meeting likely took place on Musk’s recent visit to Germany, in which the billionaire entrepreneur took a few days to see progress on Giga Berlin, met with four German conservative party officials, and stopped by German vaccine makers CureVac.

The video, while running only about a minute long, shares a quick preview from the inside of the upcoming electric crossover, in which Diess and Musk talk briefly about the functions and features it offers.

The Volkswagen ID.3 is currently set for a 2021 release, and while it’s no Model Y, it’s likely to perform well in Germany, at the very least.