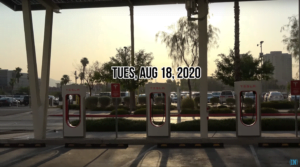 It’s no secret that electric vehicles (EV) can struggle when it’s hot out as batteries need to keep cool while also maintaining a comfortable cabin for passengers. Most wouldn’t want to put that to the test, but one YouTube channel does exactly that.

On Tuesday, automotive YouTube Channel What’s Inside shared a new video to its Family channel, in which the host, Jordan, drives a Tesla Model X to from Las Vegas to Death Valley on a day with record-breaking temperatures to see how the car will perform.

During the drive, Jordan watches the temperature rise significantly from 96 degrees Fahrenheit in Las Vegas, all the way to 131 (or 137, depending on the questionable accuracy of the sign in the video) degrees in Furnace Creek within Death Valley. The last hour or so of the drive sees a 3,000-foot drop, accounting for a large amount of the rise in temperature.

Tesla and other EV batteries, in general, are known to have major impacts on range during extremely cold weather. It appears hot temperatures can affect range as well, as the vehicle uses energy to keep batteries cool, while also cooling the cabin as well. Most Tesla owners have shared their experiences driving their car in the heat and have for the most part, been pleased with the experience.

Before going home, Jordan also shares some concerns for the trip back to Las Vegas, for both the rising elevation and the lack of range for the Tesla Model X in especially hot temperatures. He also shares concerns about Superchargers on the way home, in line with an internal message received from Tesla, encouraging users to avoid them if possible.

Though the video cuts before the trip back to Vegas, the channel plans to release a follow-up video sharing the trip back. One thing is for certain: it’s extremely nerve-wracking to watch an EV gradually drain battery capacity in the middle of Death Valley on a hot day.