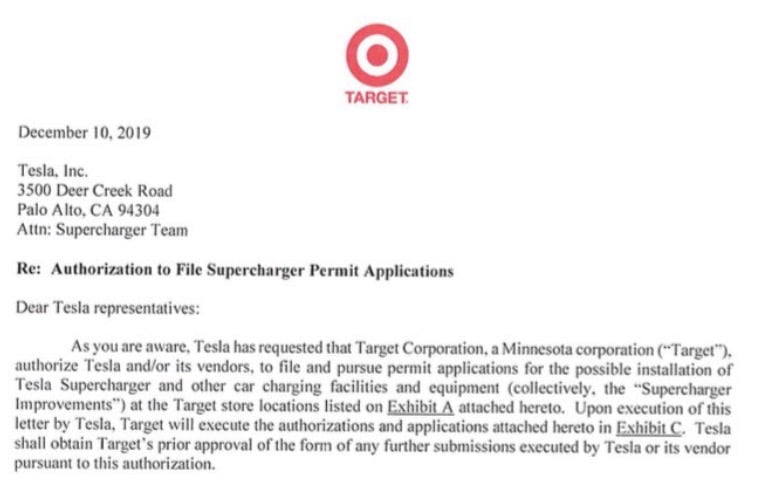 Tesla appears to have partnered with U.S. retail giant Target to install Superchargers into parking lots at 38 locations.

The discovery was spotted by MarcoRP (@MontrealTesla), who updates Supercharge.

Ho-ly ****. Just found a document (in the file for the future Daytona Beach Supercharger) that shows an agreement between Tesla & Target to install Superchargers in every US city mentioned in photos 2-3. YESSS!!!
Please RT to your local owners club@teslaownersSV @Model3Owners pic.twitter.com/q2ZWrzXYAC

“Ho-ly ****. Just found a document (in the file for the future Daytona Beach Supercharger) that shows an agreement between Tesla & Target to install Superchargers in every US city mentioned in photos 2-3. YESSS!!!”, said MarcoRP on Friday evening.

A letter dated December 10, 2019, from Target to Tesla, indicates the agreement with the latter to install Superchargers at parking lots of the retailer. The Target letter is signed off by William P. Crider, Target’s Director of Energy and Maximilien de Zegher, Tesla’s Senior Manager, North American Charging Infrastructure.

According to the Exhibit A attachment, it lists the following cities where Target locations will see a Tesla Supercharger installed:

One search by MarcoRP noted a Target location would see 32 EV chargers installed, indicating these locations would be able to accommodate high numbers of Superchargers.

That explains the new V3 in Hawthorne right at Target parking lot! Great find! Thank you!

This one opens at the Target in Nashville/Brentwood soon. There’s a couple of ChargePoint chargers as well. pic.twitter.com/JFS0u1KWTO

Other replies to MarcoRP noted the new agreement makes sense as to why people have noticed Tesla Superchargers being installed at various Target locations in the United States. Having Tesla Superchargers at Target locations may be very hand for Tesla owners doing cross-country road trips, as the retailers are usually next to major highways and freeways, while inside numerous amenities such as Starbucks and restrooms make for a great pit stop.