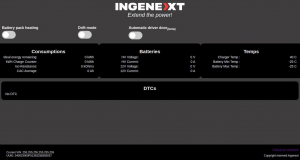 Although Tesla rolls out updates and new software on its cars every so often, they aren’t the only company trying to improve their electric vehicles (EVs).

As reported by Inside EVs, a new Reddit thread has illuminated the upcoming Ingenext Performance upgrade module, which will include a number of experience enhancements to the Tesla Model 3’s interior interface and a handful of non-driving accessories. The company has also shared that it is working on and soon plans to release a similar module for the Tesla Model Y.

Since these performance and experience boosts are not made by Tesla, many users have seen notifications condemning the third-party installations after using it. Still, Ingenext claims it’s committed to “fixing” these issues, and will likely patch the update with software that prevents the Teslas from stopping the module from working.

According to Guillaume André, founder of Ingenext, the upgrade is supposed to add the following features:

While the module still needs fixing for a workaround to the Tesla warning messages, and it’s unclear what Tesla’s specific stance on these third-party improvements are, the enhancements seem pretty worthwhile. Perhaps Tesla can even take a few notes from Ingenext and improve some of the same issues internally, instead of letting enthusiastic companies take charge.

Tesla announced on Wednesday it has added a new member to its Board of Directors—Airbnb co-founder Joe Gebbia. This was made effective on September 25, 2022. The electric automaker shared a bio of Gebbia on its website today as part of the announcement: Gebbia, a designer and entrepreneur, has spent the last 14 years of […]
Sarah Lee-Jones
6 hours ago

With Tesla’s regular software updates come gradual improvements, and one new version builds off of the automaker’s recently improved navigation system in its vehicles. Tesla added suggested destinations in its software update version 2022.28.2, as detailed in a report on Wednesday from Not a Tesla App. In the report, the publication notes a user named […]
Peter McGuthrie
16 hours ago

As Tesla continues with plans to open its Superchargers to non-Tesla vehicles, the automaker plans to shift its charging rates and times at certain locations. Tesla is updating its charging rates at select Supercharger locations starting on Wednesday, September 28, according to tweet spotted by @Whole Mars Blog. In the screenshot, Tesla says that users […]
Peter McGuthrie
16 hours ago