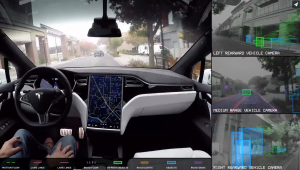 While self-driving cars are just beyond the horizon, it’s hard to imagine what’s happening behind closed doors to take this tech from pipe dream to dream come true.

In a recent interview with Tesla’s Elon Musk, Musk told Zachary Shahan of CleanTechnica that there is a team of 300 engineers behind the electric vehicle’s famed Autopilot feature.

Of the 300 engineers, 200 are dedicated to working on the software side while the other 100 work on the hardware side, specifically crafting the chip design responsible for the self-driving feature.

Autopilot was trapped in a local maximum, labeling single camera images uncorrelated in time. Now, it is not.

Although the entire Full Self-Driving Autopilot feature has not been released for major use on the road yet, the frequently improving software still sees updates almost quarterly, and is well on its way to being road-ready.

Musk also recently said that major improvements to the Autopilot feature will allow the car to steer around unnecessary bumps and potholes in the road, a major feature that is supposed to arrive soon.

On top of the 300 engineers working diligently to make this software work, Musk says several others are also partially responsible for the constantly-improving autopilot feature, including a team dedicated to labeling road signs, hazards, and the like.

In any case, Tesla’s Autopilot feature is something all EV fans can look forward to, and we will probably begin to see some of these being used at large within the next decade.

Tesla Stock Soars on News of $1,900 Price Target by Wedbush