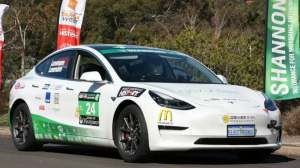 While no one is surprised about Tesla’s past success with its performance models, another history-making Tesla victory has drawn the recent attention of onlookers.

On Saturday, a Tesla Model 3 Performance won Western Australia’s Targa South West Rally for the first time in history, as reported by TechAU. The victory marks the first electric vehicle to win in a Targa130 cup event, and an impressive feat for Jurgen and Helen Lunsmann, the drivers responsible for the win.

Gemtek EV Racing, the winning crew and team of the Lunsmann’s, has raced a Tesla Roadster in years past, though this is the first year they’ve upgraded to a Model 3.

The Model 3 won by a landslide, achieving an impressive total time of 1:00:17. The second place winner was driving a Mitsubishi Lancer Evo 7 and earned a time of 1:04:40, more than 4 minutes behind the Model 3. Among the cars present were also other notoriously fast cars, including the Porsche 911 and the Mitsubishi Lancer Evo 9, neither of which stood a chance next to the Model 3.

Though the EV craze is just hitting the racing world, it feels like they should’ve been around long before with the amount of victories they’re already racking under their belts.

Tesla’s Model 3, Y and S units make up a market share of 26.33 percent of the electric vehicles (EVs) in Denmark, according to data shared by the Danish car imports trade association De Danske Bilimportører (via @Tesla Club Danmark). Out of a total of 105,379 EVs on Denmark’s roads, the data shows that Tesla’s […]
Peter McGuthrie
12 hours ago

As electric vehicles (EVs) continue to gain steam across worldwide markets, one European country known for early adoption of zero-tailpipe-emission vehicles has just reached a new record for single-day deliveries from Tesla. Tesla set a new daily record with 297 vehicles delivered to Norway in one day with Model Y cars from Giga Berlin, as […]
Peter McGuthrie
12 hours ago

Tesla adjusted its Supercharger pricing in Germany and some other European countries again, this time raising prices by six to nine cents per kilowatt-hour at each station, reports @Tesla_Adri, sharing screenshots from @ModelXOlli. Along with the news, Tesla Adri also shared screenshots of the Hilden Supercharger preview on the Tesla mobile app before and after […]
Peter McGuthrie
13 hours ago