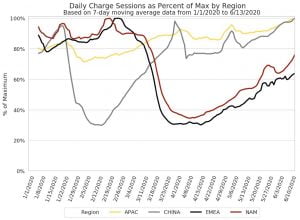 Tesla CEO Elon Musk has had his fair share of opinions on the coronavirus outbreak. Early on in the outbreak, the eccentric CEO tweeted saying, “The coronavirus panic is dumb.” Musk later took local officials in Alameda County, California to task over the shutdowns of Tesla’s main production site in Fremont. Last night the CEO returned to Twitter to share some more updates on COVID-19’s impact on Tesla Supercharger usage.

In a graph posted by the CEO, numbers show the differences between Supercharger usage both before and after the coronavirus outbreak. Numbers comparing China & Asia Pacific to North America and Europe track the hot spots of the outbreak quite accurately. As Musk notes, “China & Asia Pacific Supercharger usage above pre-covid highs. North America catching up fast. Europe slightly behind.”

With more states in North America reopening after extended lock down measures, Musk’s prediction of increased Supercharger station use looks accurate. The peak of the outbreak migrated from Asia to North America. As a result, Tesla resumed production in its Shanghai facility much faster. The Chinese market itself was even particularly kind to Tesla vehicle sales. The company even reported a tripling in Model 3 sales from April to May.