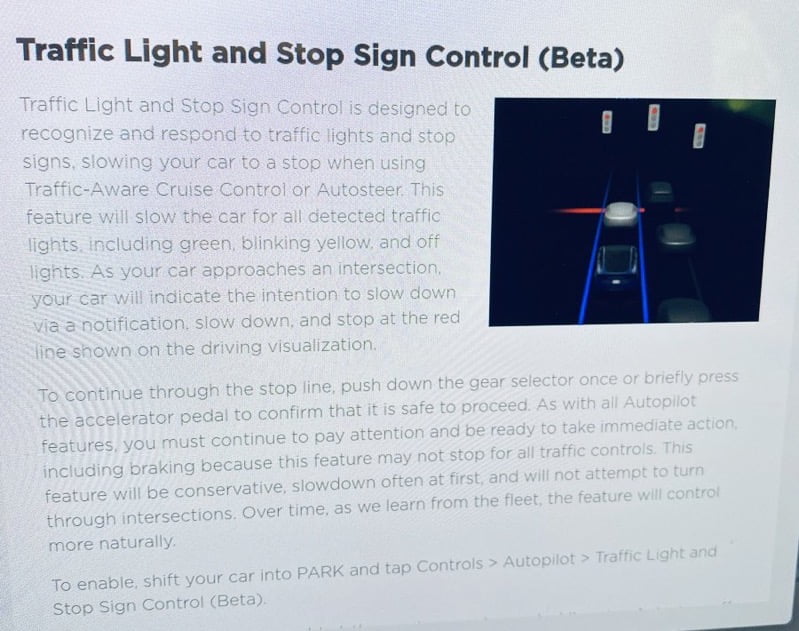 Tesla CEO Elon Musk previously promised TLSSC would be released to Canadians on Thursday and the company did not disappoint.

“Traffic Light and Stop Sign Control is designed to recognize and respond to traffic lights and stop signs, slowing your car to a stop when using Traffic-Aware Cruise Control or Autosteer. This feature will slow the car for all detected traffic lights, including green, blinking yellow, and off lights,” explains the Tesla 2020.20.13 software update in Canada.

“As your car approaches an intersection, your car will indicate the intention to slow down via notification, slow down and stop at the red line shown on the driving visualization,” says Tesla’s update.

“To continue through the stop line, push down the gear selector once or briefly press the accelerator pedal to confirm that it is safe to proceed. As with all Autopilot features, you must continue to pay attention and be ready to take immediate action, including braking because this feature may not stop for all traffic controls,” explains Tesla.

“This feature will be conservative, slowdown often at first, and will not attempt to turn through intersections. Over time, as we learn from the fleet, the feature will control more naturally,” says Tesla about the beta feature.

Above is a video from Gary (@akidesir), who tweeted Elon Musk last week and received a response noting TLSSC was coming today.

His five and a half minute video details the latest Tesla 2020.20.13 software update and demos TLSSC in action.

Tesla owners in the United States got TLSSC in beta back in mid-April. Now, as Canadians get this beta feature for Full Self-Driving and Autopilot, the Tesla fleet in the Great White North will help this feature improve over time.