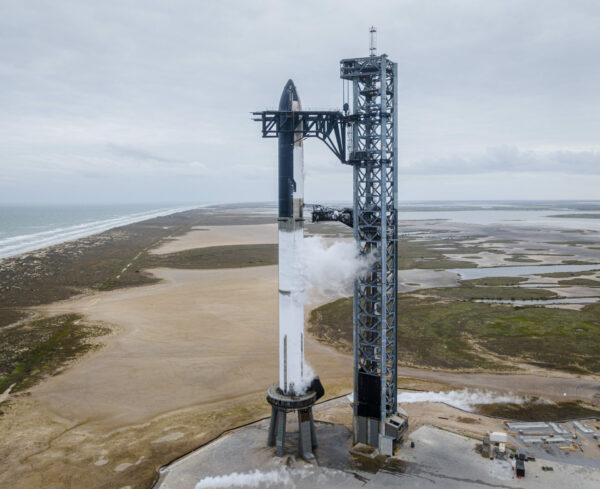 SpaceX is planning to perform a static fire test of the Super Heavy Booster’s 33 Raptor engines, after a successful “wet dress rehearsal” (WDH) of Starship 24.

To do so, SpaceX is destacking Starship 24 from Booster 7 to prepare for the static fire test, both of which represent the company inching closer to launching the reusable spacecraft for the first time.

SpaceX performed the WDH of the rocket on Monday, marking the very first time an integrated Starship and Booster were loaded with over 10 million pounds of propellant.

After completing Starship’s first full flight-like wet dress rehearsal, Ship 24 will be destacked from Booster 7 in preparation for a static fire of the Booster’s 33 Raptor engines pic.twitter.com/YXSfyBufmX

The test was referred to as a “wet dress rehearsal” because it fully activated and integrated all of the Booster and Ship’s parts, and used the “wet” fuel propellant during the tests.

The news comes just weeks after SpaceX head Elon Musk said an orbital launch of Starship was “highly likely” to take place in March, after the initial launch has been delayed for months at a time over the past year or so.

Now, the only thing standing in the way of SpaceX’s inaugural launch of a Starship spacecraft is the upcoming static fire test and the officially granting of a launch license from the Federal Aviation Administration (FAA).

Japanese new outlet TV Tokyo Biz shared a video of a drone on Thursday, delivering crucial emergency supplies to remote, snowy areas of Chichibu with the operator of the drone connected to SpaceX’s Starlink (via Reddit). The news comes after the Chichibu area was affected by a landslide this week, causing nearby roads to become impassable. […]
Peter McGuthrie
6 mins ago