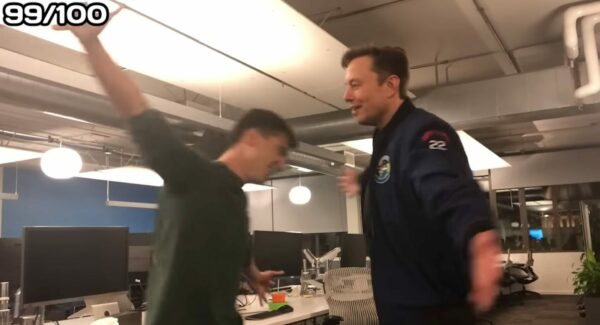 One major fan of Elon Musk has earned a long-awaited moment with the Tesla and SpaceX CEO for his own YouTube channel.

Fidias Panayiotou hugged who he considered to be the world’s top 100 celebrities in a new video shared on Monday, including Musk.

The video shows all 100 hugs with a number of YouTube celebrities and other public figures, all leading up to his final hug with Musk.

Panayiotou calls Musk his hero and has a short conversation with him before going in for the hug. The nearly-20-minute video is capped off with the Musk hug, and the billionaire entrepreneur seems to be a pretty good sport about it.

Additionally, Panayiotou says he’s been working on meeting Musk and making this video for about a year and a half before successfully hugging the Tesla head. Video was shown earlier of kids talking to Musk at the World Cup in Qatar, asking the Tesla CEO to hug Fidias.

Tesla’s CEO is headed to trial this week over an alleged misleading 2018 tweet about taking the company private, so the hug video will come as a pleasant surprise for many Musk fans who simply want to witness a wholesome moment.

You can watch Panayiotou’s full video including the hug with Musk and 99 other celebrities in the video below (the hug is at around the 18-minute mark):

The Motortrend crew recently visited Frito-Lay’s upgraded, zero-emission distribution center in Modesto, California to talk with Tesla Semi drivers and see the truck in person. The publication was able to gather a few extra specs on the Tesla Semi, noting that the huge vehicle sported a Model S Plaid tri-motor powertrain but turned around the […]
Peter McGuthrie
23 hours ago