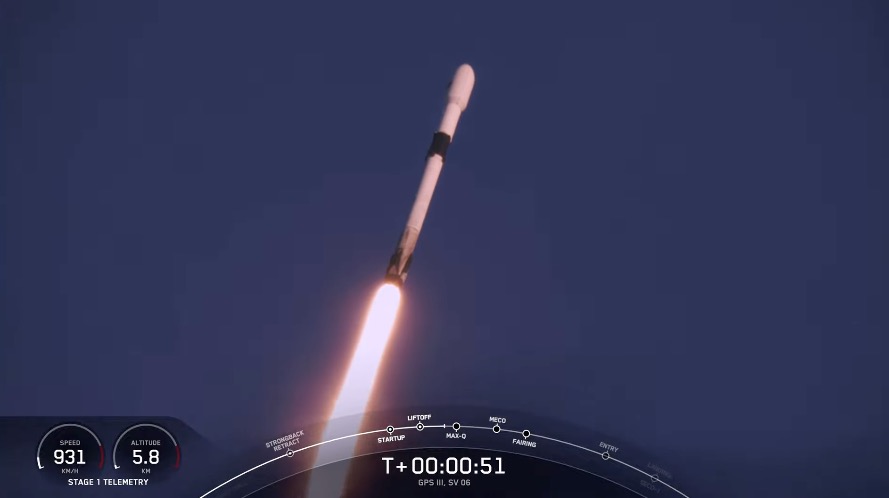 SpaceX launched the GPS III Space Vehicle 06 mission on Wednesday using the Falcon 9 first-stage booster. The GPS III is a satellite for the US Space Force.

This was the second launch and landing for this particular Falcon 9 booster, taking place at the Cape Canaveral Space Force Station in Florida. Previously, this booster launched the Crew-5 mission to the International Space Station.

Following the launch and stage separation of the booster, it successfully landed on the A Shortfall of Gravitas droneship in the Atlantic Ocean.

The launch took place at 7:24 am, ahead of another launch this week for SpaceX.

On Thursday, SpaceX will also launch a Starlink mission, overseeing the launch of 51 Starlink satellites into low-Earth orbit from the Vandenberg Space Force base in Santa Barbara County, California.

SpaceX is also holding a backup launch window for the Starlink mission on Friday, January 20 at 7:09 am.

After stage separation of the Falcon 9 booster, the spacecraft will return back to Earth and will be caught using SpaceX’s Of Course I Still Love You droneship in the Pacific Ocean.

You can watch SpaceX’s live stream of the GPS III mission launch below.

SpaceX has launched a new feature for the Starlink app version 2023.03.0 called “sleep schedule,” which is intended to help save energy during normal sleeping hours (via @Nathan Owens). The feature toggles a power-saving mode, causing the dish to report an outage reason as “Sleeping” during the pre-set hours. The update also included the addition […]
Peter McGuthrie
17 hours ago

SpaceX launched 56 Starlink satellites on Thursday morning via its Falcon 9 booster, with a payload weighing over 17.4 metric tons making it the heaviest payload ever flown on the latter. On Thursday, January 26 at 4:22 a.m. ET, Falcon 9 launched 56 Starlink satellites to low-Earth orbit from Space Launch Complex 40 at Cape […]
Peter McGuthrie
18 hours ago