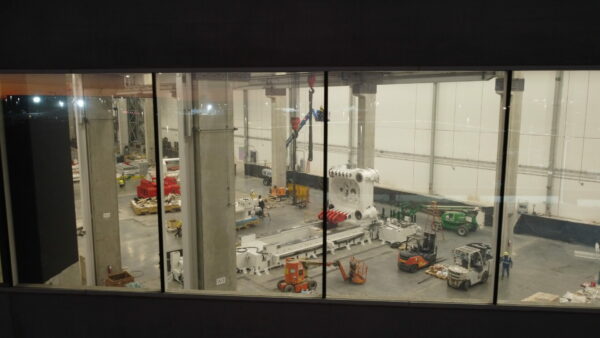 Production equipment for the Tesla Cybertruck is being assembled, ahead of the automaker’s plans to make the electric truck later this year.

Tesla’s Texas Gigafactory appears to be assembling many of the IDRA Cybertruck Giga Press parts it has received in recent weeks, as seen in recent shots shared on Friday by @Joe Tegtmeyer.

The parts were spotted in IDRA’s large industrial-sized wooden boxes, after being shipped to Giga Texas from Italy in October.

“Friday the 13th! Don’t get distracted by all the price cuts on Tesla cars, the real story is the assembly of the 9K-ton Giga Press! Here are a few images to get you started, much more on a busy Giga Texas in my YouTube video later today!,” said Tegtmeyer. We’ll update this post with his video when it is available.

Friday the 13th! Don't get distracted by all the price cuts on Tesla cars, the real story is the assembly of the 9K-ton Giga Press! Here are a few images to get you started, much more on a busy Giga Texas in my YouTube video later today! pic.twitter.com/Gz6uaFCJ2M

Following Thursday’s shipment, Tegtmeyer noted that multiple of the boxes were being shipped over the past few weeks, each including 28 to 30 separate parts.

The Giga Press is an aluminum die casting machine that will produce the chassis and panels for Cybertruck, allowing Tesla to scale its production of the truck, similar to how it makes its Model 3 and Model Y.

Tesla also posted a number of positions for Cybertruck production back in November. With recent price cuts across the entire Tesla vehicle line up, many are hoping that Tesla will come close to its original pricing for Cybertruck, which would be starting at $39,900 USD, as first announced back in 2019. However, times have changed in nearly four years, with the world suffering from supply chain shortages and inflation.