Tesla has won the U.S. luxury sales crown for 2022, beating BMW, according to estimates from the Automotive News Research & Data Center.

Elon Musk’s Tesla beat German automaker BMW for the crown, with an estimated 491,000 sales in the U.S., based on estimates. BMW was in second place with 332,388, followed by Mercedes-Benz with 286,764 in sales for third place.

Tyson Jominy, vice president of data and analytics at J.D. Power, said to Automotive News, “Not only do luxury buyers want EVs, but the one that only sells EV is now the sales leader.”

U.S. luxury auto sales declined in 2022, a year where chip shortages and supply chain constraints were rampant. Tesla appears to have fared better at managing these issues than other automakers. 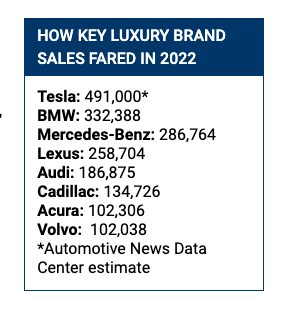 Non-Tesla startups and traditional automakers saw an 81 percent surge in EV registrations in the first 10 months of 2022. Tesla saw its registrations rise 50% during this same period, according to Experian data.

Back in June, the annual Cars.com American-Made Index for 2022 deemed Tesla’s Model Y as the ‘Most American-made’ car, beating its sibling the Model 3.

As electric vehicles (EVs) continue to grow in popularity, many automakers are still working out the kinks to avoid fire risks, including one luxury automaker now facing a recall. The 2022 BMW i4 eDrive40, i4 M50, iX xDrive50 and iX M60 EVs are facing recalls, due to increased potential for battery fires, according to Auto […]
Peter McGuthrie
6 months ago