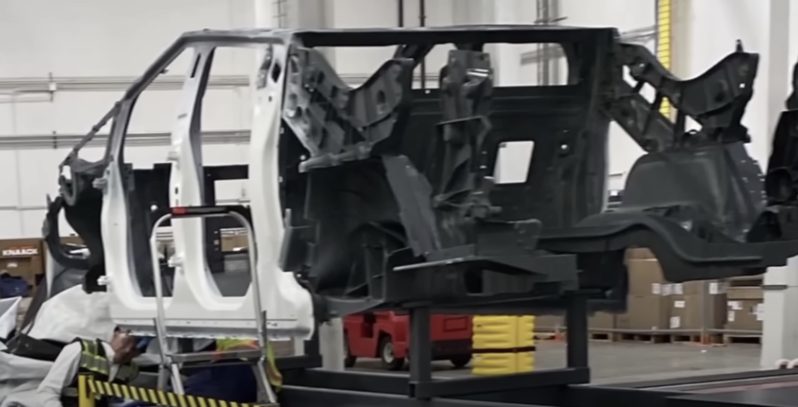 Tesla’s Cybertruck is slated to start production soon and what appears to be the first image of a Cybertruck frame has popped up on the web.

The image was shared with Kim Java by an anonymous source and what we see is the Cybertruck frame and casting parts at the back. The truck’s frame sits under a sign that reads “powder coat”, while a worker can be seen underneath the truck.

It’s unclear where this image was taken; it’s likely from Gigafactory Texas, where the truck will be made. IDRA’s 9,000-pound Giga Press to help make the Cybertruck’s castings is set to arrive at Giga Texas soon.

According to Kim Java, sources also say Tesla may be having issues scaling up 4680 battery cells for Cybertruck, but that’s just a rumour at this point.

Check out Kim Java’s video below:

Back in October, drone pilot Joe Tegtmeyer spotted two wrapped Cybertruck frames at Gigafactory Texas. The image we see above could be one of these frames.

Tesla told us during its recent Q3 the Cybertruck has now reached its “tooling” stage at Giga Texas.

“We are making progress on the industrialization of Cybertruck, which is currently planned for Texas production subsequent to Model Y ramp,” said the automaker at its Q3 earnings call. The first Cybertruck deliveries are slated for mid-2023.