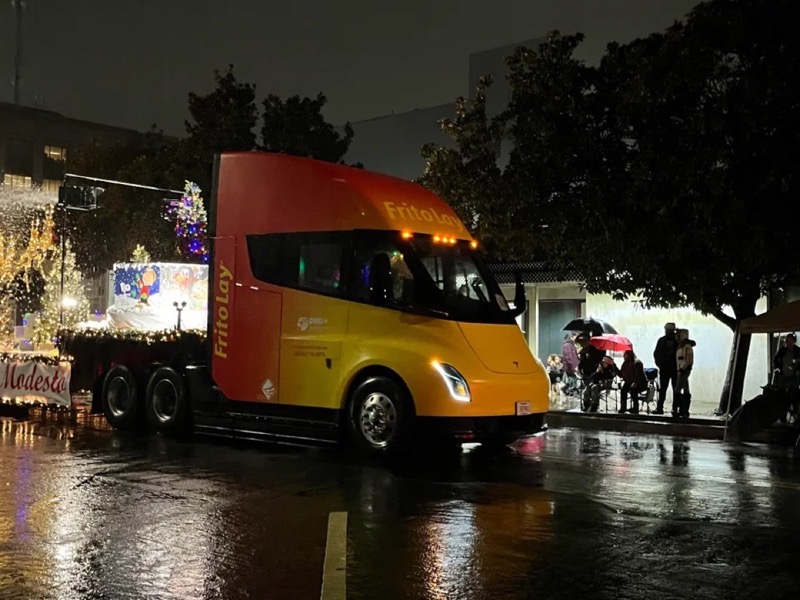 Tesla delivered its first Semi trucks this week to customer PepsiCo, with the launch event at Gigafactory Nevada showcasing some decked-out trucks with Pepsi and Frito-Lay graphics.

PepsiCo executives joined Elon Musk on stage at the delivery event, with the Tesla CEO saying the first delivery included Frito-Lay snacks sent to the special event itself.

Now, it appears the Frito-Lay Tesla Semi has joined a local Christmas parade in Modesto, California. The video shared by @bshaddix shows the Frito-Lay Semi pulling a float with lights and a banner that reads, “Merry Christmas from Frito Lay Modesto.”

Instead of a traditional diesel truck pulling a float in a parade, the electric Tesla Semi has no exhaust fumes for parade-goers to breathe in. Many replies to the video commented how parades normally have a tonne of fumes but seeing the Semi in action was great for the environment and also PR for Frito-Lay.

“This is a big deal for improving valley air,” said @bshaddix, noting it was like “seeing Santa” when the Semi appeared in the parade.

As part of Tesla’s Semi delivery event, the company showcased how the truck was able to go on a 500-mile journey on a single charge, from Fremont to San Diego.

The Motortrend crew recently visited Frito-Lay’s upgraded, zero-emission distribution center in Modesto, California to talk with Tesla Semi drivers and see the truck in person. The publication was able to gather a few extra specs on the Tesla Semi, noting that the huge vehicle sported a Model S Plaid tri-motor powertrain but turned around the […]
Peter McGuthrie
4 days ago