Tesla on Thursday evening held its Semi delivery event, where it delivered its first production electric truck to customer, PepsiCo.

Company CEO Elon Musk was on hand for a presentation alongside Dan Priestley, Senior Manager, Semi Truck Engineering the company (who did an incredible job beside Musk).

Both Musk and Priestley highlighted the major features of the Semi, noting it has three-times the power of any diesel truck on the road, along with the efficiency to go 500 miles on single charge.

The Semi has a 1,000 volt powertrain, with Priestley teasing there are “more vehicles coming with that.”

The tri-motor system and carbon-sleeved rotors in the Semi are the same ones used by Plaid vehicles such as the Model S and Model X. There’s one unit for efficiency, and two acceleration units for torque. Musk said the drive unit is small enough to hold in your hand and can power a Semi with an 80,000 pound load. 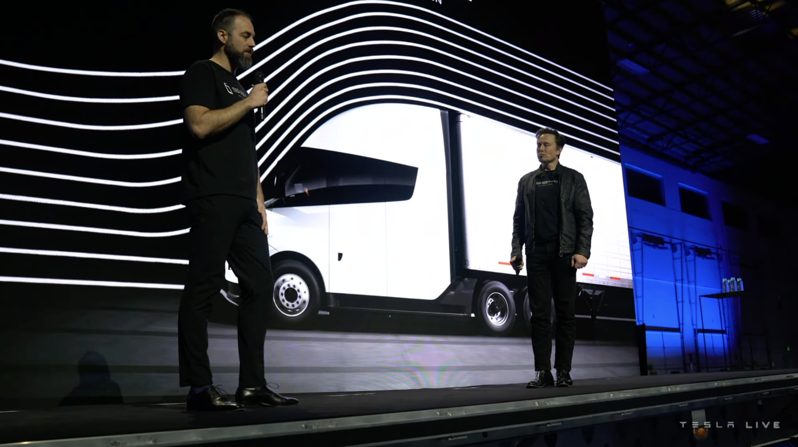 Tesla was able to leverage existing elements made at volume to achieve extreme efficiency of cost and capability, such as their drive unit, infotainment, heat pump, and inverter systems in other cars.

Company engineers also tested Semi in a variety of harsh conditions to maximize reliability and durability.

Tesla also shared a chart of Semi and its battery usage, completed at highway speed, without charging on the way, and at over 4,000 ft of elevation, a drive from Fremont at 97% down to San Diego at 4%, a 500-mile journey, completed on November 25, 2022.

Update Dec. 2: Musk added this morning the Semi’s current efficiency is 1.7kWh/mile, saying “but there is a clear path to 1.6, possibly 1.5.” 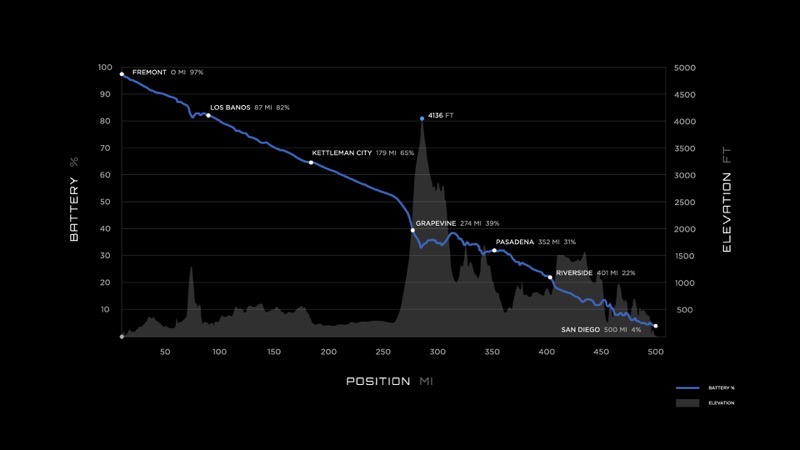 Tesla says it will use Semi for its own fleet and supply chain, as they want to close that feedback loop to make the truck better.

Musk says Tesla has been using Semi trucks day and night from Sparks, Nevada to the company’s factory in Fremont, California. The company said regenerative braking with Semi changes the game since it’s safer when going downhill, with brakes never being used to slow down the truck. Musk called it “mindblowing” that Semi can have cold brakes after descending.

“Basically looks like an elephant looking like a cheetah,” described Musk of the Semi when it is driving on its own, without a load.

The cab also is tall enough on the inside for drivers to stand, allowing for room to change if needed, mentioned Priestley.

“We’d just like to thank PepsiCo, they’ve been a great partner,” said Musk, as PepsiCo executives appeared on stage and accepted key cards for the Semi, to a round of group high-fives. The first delivery was completed by Frito Lay, delivering snacks to the Semi delivery event.

“It’s been a long five years, but this will really revolutionize the roads,” concluded Musk, thanking the audience for their support.

Check out the full event replay below:

Tesla also shared a video of the Semi driving 500 miles on a single charge which took 8 hours and a mandatory 30-minute bathroom break. No special tricks were used to achieve this. The Semi came off the factory line and was ready to go:

Semi will be charged using V4 Superchargers that offer 1 Megawatt DC charging, which also will be used by Cybertruck, too. This smaller cable is liquid-cooled and able to offer 1 Megawatt of power through it for high-power charging.

There are some questions unanswered about Semi. There was no mention of Autopilot, but we assume it is fully integrated and ready. We didn’t get an update on pricing or on other estimated delivery dates.

Here’s a look at the three cameras mounted in various positions on the Semi trucks side mirrors, as shared by Brandon:

Check that mirror out… 3 cameras mounted in various positions! Love it. pic.twitter.com/vmjjLIBehB

On Monday evening, Nevada Governor Joe Lombardo’s 2023 State of the State speech revealed Tesla is set to announce a new manufacturing facility in northern Nevada on Tuesday. Today, President Joe Biden and the White House confirmed what Lombardo said and now Tesla has confirmed the announcement itself. “We will be investing over $3.6 billion […]
Sarah Lee-Jones
5 days ago