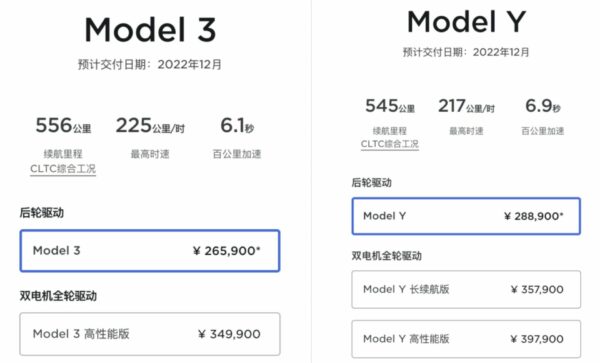 Tesla has changed its estimated delivery times on all models in China, with the order configurator page now saying all Model 3 and Y trims will be delivered in “December 2022” (via @Tslachan).

Previously, each trim and model displayed one to five weeks for estimated delivery.

The change comes as Tesla seemingly pivots to focus on the domestic market in China for the remainder of the quarter, with all vehicles expected to be delivered this month.

The news comes just days after data surfaced showing that Tesla had delivered 55,621 vehicles in China in November, and amidst rumors of waning demand in the country.

Tesla to Fix Lights Issue for 435,000 Cars in China with Software Update https://t.co/tsHEvDXLjw

Tesla has also cut prices for the Model 3 and Y multiple times in China in recent months, assumed to be an attempt to help sell as many cars as possible in the world’s largest auto market.

The automaker saw delivery times improve in China for its Model 3 and Y units last month, following the company’s move to upgrade production lines at its Gigafactory Shanghai just a few months ago.

Tesla also plans to send personnel from Giga Shanghai to its Fremont Gigafactory to help boost production in the U.S.