Starlink is garnering more users than ever before with its recent service expansions, but speeds could be decreasing across the board with added use for users of SpaceX’s satellite internet service.

SpaceX’s Starlink satellite internet speeds dropped slightly in the third quarter of the year, as shared on Wednesday with data compiled by Ookla‘s speed tests.

In both the U.S. and Canada, Starlink speeds dropped by about 17 percent and 14 percent, respectively, from Q2 to Q3 of this year. In Chile, speeds remained about the same quarter over quarter.

Ookla analyzed speeds from Starlink, HughesNet and Viasat to generate the data, in addition to looking at how Starlink’s performance has changed in Canada, Chile and the U.S. 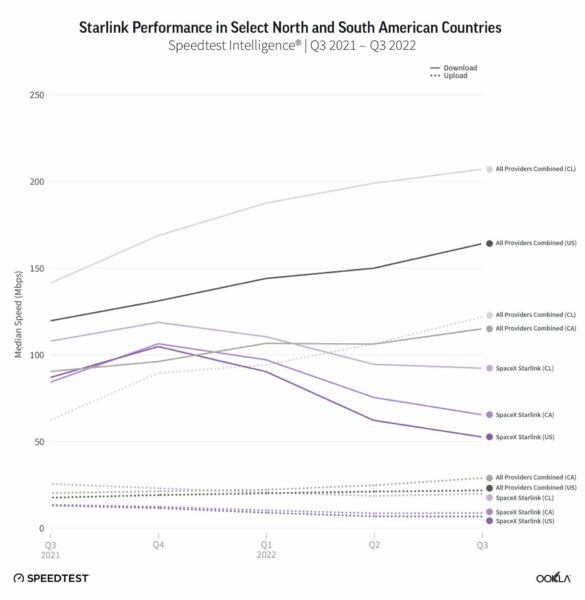 Starlink internet reached 400,000 active users worldwide in Q2, and since then, speeds have largely decreased for the low-Earth orbit satellite internet service. Starlink’s speeds still outpaced Viasat and HughesNet in most of the countries where it was tested.

Despite dropping speeds, the service is still garnering positive attention, especially from U.S. residents living in rural or remote areas that wouldn’t be able to reach these speeds from other providers. The fastest U.S. Starlink speeds were found in Puerto Rico and the Virgin Islands.

Ookla also points out “Starlink remains a boon for rural U.S. consumers who can afford it,” noting sign ups for the service has “proliferated across the U.S.”, a 200% increase year-over-year in U.S. counties. Designated ‘nonmetro’ counties saw Starlink usage increase 300% year-over-year.

SpaceX has launched a new feature for the Starlink app version 2023.03.0 called “sleep schedule,” which is intended to help save energy during normal sleeping hours (via @Nathan Owens). The feature toggles a power-saving mode, causing the dish to report an outage reason as “Sleeping” during the pre-set hours. The update also included the addition […]
Peter McGuthrie
24 hours ago